The battle for the prize-fund of €1.25m begins at 2pm Irish time in Barcelona, Catalonia 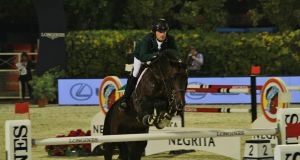 Ireland has qualified for Sunday’s second round of the Longines FEI Nations Cup final for 2018 having finished sixth in Friday night’s opening session on a total of five faults.

Cork’s Billy Twomey, who was pathfinder for the team with Kim Barzilay’s nine-year-old Je t’Aime Flamenco gelding Kimba Flamenco, had one fence down for four faults while Waterford’s Anthony Condon, riding his own and John Hales’s 12-year-old Arko stallion SFS Aristio, jumped clear but picked up a single time penalty.

As Tipperary’s Shane Breen had three fences down with Ipswich Van De Wolfsakker, the pressure was on Offaly’s Darragh Kenny who had to go clear to secure the team’s qualification. This he did, well inside the time, on Ann Thompson’s 12-year-old Cornet Obolensky stallion Balou du Reventon to book Ireland’s place in Sunday’s final as Breen’s score could be discarded.

Austria and Italy topped the leaderboard on one fault apiece ahead of Sweden, Belgium and The Netherlands who were on four faults. Four teams were on eight so the remaining qualifying spots were decided on time with Switzerland and France going through to Sunday while Germany and the USA will compete in Saturday’s Challenge Cup along with Canada (nine), Britain (12), Brazil (12), the UAE (30) and Spain (34).

“We wanted to be competitive and all our horses jumped really well,” commented Irish team manager, Rodrigo Pessoa. “We are looking forward to Sunday’s final where everything is to play for with everyone starting on a zero score.” The second round starts at 2pm Irish time on Sunday, with teams battling for a prize-fund of €1.25m as well as the Nations Cup Final trophy.

Ireland had an excellent start to the five-star show with Shane Breen winning the opening 1.45m speed class on Team 27’s Canturo 12-year-old Can Ya Makan ahead of Kenny riding Extra van Essene (58.61). Leopold van Asten of The Netherlands finished third on VDL Groep Miss Untouchable (59.29).

There have been no wins so far for Irish riders in the international jumping competitions at the three-star Horse of the Year Show in Birmingham but there has been some success in the showing section.

On Thursday, Galway’s Michael Harty landed the Baileys Horse Feeds Mountain and Moorland ridden Connemara of the year title on the nine-year-old stallion Cashelbay Rocket which is owned by his breeders, Robbie and Barbara Fallon of the Cashel Bay Connemara Pony Stud outside Athenry.

There were many Irish-bred horses among the showing winners so far at HOYS, the most notable being the Carplant Group of Companies show hunter of the year champion View Point, an ISH gelding ridden by Robert Walker for Jill Day. The seven-year-old bay Loughehoe Guy gelding was bred in Co Clare by Sean Jones out of the OBOS Quality 004 mare, Quality Dame.

In eventing news, Kildare-based Cathal Daniels, team silver medallist at the recent World Equestrian Games in North Carolina, has been named on the Irish squad heading to the upcoming World championships for young event horses at Le Lion D’Angers in France (October 18th to 21st).

England-based Clark has also been selected for the CCI1* championship for six-year-olds with Homme D’Hotot M along with Suzanne Hagan (OBOS Take One) and Clare Abbott (Jewelent). Jane O’Flynn has been nominated as reserve with Merrywell Tradition.