Riveting clash of styles as McGregor seeks to reconquer

Irishman will need to keep his distance from smothering wrestler Nurmagomedov

Khabib Nurmagomedov stormed out of the final media conference ahead of his lightweight title fight against Conor McGregor on Thursday (October 4), in response to the Irishman not turning up on time. Video: UFC 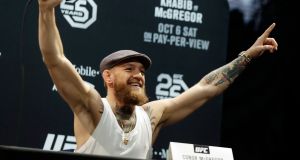 The Ultimate Fighting Championship has changed a lot in its 25 years of existence, but one thing remains true – styles make fights, and Conor McGregor and Khabib Nurmagomedov could not be more different.

When the two meet at the T-Moblie Arena in Las Vegas on Saturday night it will be a classic clash of styles in every respect.

McGregor is the brash bad boy, the flamboyant loudmouth with the incredible striking skills to back it up who has taken the sport by storm, and has now launched his own whiskey brand.

Nurmagomedov, on the other hand, is the exact opposite – the suffocating, smothering wrestler from Dagestan is a devout Muslim who prefers family and humility to fame and hubris.

At Wednesday’s open workouts at the Park Theatre on the Las Vegas strip, it was clear which style the fans who turned up preferred. While they cheered McGregor’s cat-like movement and his thunderous pad work with striking coach Owen Roddy, they booed Nurmagomedov as soon as he came onstage.

Taking the bait, the Russian toyed with the Irish fans in the audience, taunting them about how English, rather than Irish, is their native tongue and informing them that McGregor’s grandfather fought for the British navy.

But trash talk is not his style, and he was soon invoking God’s blessing again ahead of his first title defence of the lightweight belt he won in April.

Building up a reluctant sweat for those in attendance, both fighters stuck to their respective script during the workouts, which are more for the media and fans than anything else. Nurmagomedov wrestled some of his teammates, McGregor displayed his striking prowess, and neither seemed to want to reveal anything they were working on to counteract the strengths of the other.

The keys to victory for both men are simple, and the fight will be won by whoever manages to control the distance between the two in the octagon on Saturday night.

McGregor will want to keep Nurmagomedov at arm’s length, uncorking his sledgehammer left hand whenever the opportunity presents itself. Though he has shown a proclivity for the spectacular before, Saturday will be no night for spinning back kicks or flying knees – the Irishman will look to maintain range with simple jabs and kicks while hopefully setting up the knockout blow.

Nurmagomedov, on the other hand, will want to close the distance, get into a clinch and dump McGregor on the ground where he can control him and tire him out with his exhausting top pressure.

From there he will rain down punches and elbows to either force a knockout or open up for a fight-ending choke or joint lock.

It will not be enough for McGregor, a former two-weight champion, to defend a single takedown attempt either. He will need to stay in the middle of the octagon and away from the fence, where Nurmagomedov is famous for stringing together different kinds of grabs and throws to get his opponent where he wants him – flat on his back. The Russian is incredibly quick to change tack, abandoning takedowns that aren’t working for ones with a greater chance of success.

Whereas McGregor can be unpredictable, everyone knows what the Russian is going to do, but in 26 professional fights no-one has come up with a way to counteract it, and he remains unbeaten.

McGregor, on the other hand, has suffered a number of losses in his professional career, the biggest among them coming across the Strip at the MGM Garden Arena when he was submitted by Nate Diaz in 2016.

Many would say that the taste of defeat was the makings of him in the cage. Prize-fighting has an uncomfortable habit of shining a harsh light on one’s mental and physical shortcomings, and his were starkly evident as he punched himself out before being mauled on the ground and submitted by Diaz.

He bounced back, looking a far more rounded prospect in their next encounter when winning a five-round war of attrition in their rematch.

His development curve culminated in a devastating knockout win over Eddie Alvarez that saw him win the lightweight belt in November that year, propelling him into the sporting and financial stratosphere.

Since then, his boxing match with Floyd Mayweather notwithstanding, he has hit the headlines for all the wrong reasons, jumping into cages where friends were fighting, abusing referees and generally behaving as if he is accountable to no-one – which, in the fight game at least, he isn’t.

Though the clash of styles is fascinating for fans and the violent incident in Brooklyn that saw McGregor plead guilty to criminal charges illustrates the bad blood between the two, the war of words has yet to catch fire, and it may never do so.

Nurmagomedov left Thursday’s press conference before McGregor, late as always, had even arrived.

The Russian’s English is still somewhat limited, and this may have been beneficial in terms of protecting him from McGregor’s verbal onslaughts at the few media events they have done together to promote the fight.

While undoubtedly a huge event, the UFC will have been praying for more verbal fireworks to increase the anticipation around the fight. The atmosphere in Las Vegas is expectant, but it is nowhere near the hysteria of previous McGregor battles, when his fans swarmed to the desert and took over the whole city.

Opportunities to market the fight are fast running out, and McGregor is using the war of words to sell the products he endorses, and the notion that he is once again headed for the summit of the lightweight division.

But while he loves nothing more than being on the microphone and engaging in a battle of will and wits, McGregor’s opponent is waiting patiently for the cage door to close and the real fighting to begin.