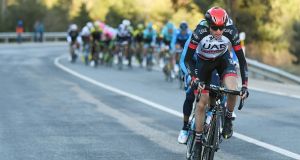 Dan Martin’s hopes of winning a second Volta a Catalunya evaporated on Thursday’s fourth stage of the race, with his lack of recent competition telling on the tough stage to La Molina.

First to the line was Alejandro Valverde, who outsprinted Egan Bernal (Team Sky) at the summit of the ski resort. His Movistar team-mate Nairo Quintana was third.

Martin (UAE Team Emirates) finished one minute 29 seconds back, and was visibly deflated by the result. He was forced to withdraw from the recent Paris-Nice event due to illness and this disruption, as well as a lighter race schedule than last year, mean he is further off his full race fitness than he had expected. He is now 19th overall, one minute 54 seconds behind Valverde.

Martin’s first big goal of the season is next month’s Ardennes Classics. He will do a training camp after Sunday’s finish of the Volta a Catalunya, with the aim to sharpen his form in advance of the key targets Flèche Wallonne and Liège-Bastogne-Liège.

Meanwhile, although the Rás na mBan is yet to announce a new title sponsor for the event, the race has confirmed that it will indeed go ahead this year. It will run from September 5th to 9th, and will again be based in Kilkenny City.

Race director Valerie Considine said that the funds needed to run the event have been secured. “It’s certainly been an interesting six months since last year’s race and it’s a great relief that we have confirmed the necessary income to run the event at its customary high level,” she said this week.

“We have been delighted in the way that so many of our partners and supporters have rowed in to make sure that Irish women have a proper international racing outlet at home. Rás na mBan is interwoven with the fabric of Irish women’s cycle racing and it’s been heart-warming that our commercial partners and some very welcome patronage have combined to extend the heritage of this important event.”

Those committing financial support include Kilkenny County Council, the National Dairy Council, the IVCA and Wicklow 200, plus Cycling Ireland. Details of the route will be announced at a later date, as will the identities of the Irish and international teams.

In related news, selection for the Irish team at the race will be determined by performances in the women’s National Road Series. Sunday’s Des Hanlon Memorial in Carlow will serve as the first event in that series for both women and men.