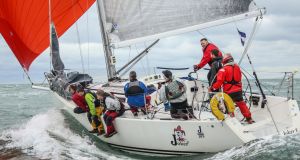 After weeks of choppy waters, the cruiser-racer body met in Portlaoise and retained Shannon Estuary sailor Simon McGibney as its commodore. Howth Yacht Club’s Richard Colwell becomes ICRA’s new vice-commodore and several members of its recast executive now hold specific briefs; such as Co Wicklow designer Mark Mills, who is in charge of technical matters for the ratings body.

Following January’s decision to stage the national championships in Galway, there was also confirmation that the west coast event will proceed, thereby removing any uncertainty over the shape of the 2018 fixtures calendar.

A new interim constitution was also adopted until a more comprehensive document can be tabled at the autumn conference and agm.

One of the most immediate matters facing the new executive is fielding a strong Irish representation at what the the Royal Ocean Racing Club predict this week will be a “record breaking” entry for this June’s IRC Europeans at Cowes. But how many Irish crews attend given its proximity to Howth Yacht Club’s new Wave Regatta and the Round Ireland Race remains to be seen.

The 2017 Mini Transat hero Tom Dolan will enter the Figaro next month and the Co Meath sailor already has ambitions to podium in his rookie season.

With 15 weeks to the the 2018 Round Ireland, a new trophy – yet to be named – to recognise the best armed forces entry in the 40th anniversary race has been announced. Wicklow Sailing Club aims to bolster the profile of its race within the armed forces across Europe, where offshore sailing is recognised as an “invaluable team building” platform. The proximity of the Volvo Round Ireland to the successful Beaufort Cup, held as part of Volvo Cork Week, means military teams travelling to Ireland can now consider competing in both.

With less than a month to go to the first Irish Sea Offshore Race (ISORA), Holyhead Sailing Club is making alternative plans to welcome the ISORA fleet to North Wales after its marina and local racing fleet were extensively damaged in Storm Emma.

March has seen strong performances from Irish youth sailors at UK Spring dinghy events that should set the stage for some tight battles at next month’s Volvo Irish Sailing youth championships on Dublin Bay.

Five Irish Sailing Youth Pathway Classes (Laser Radial, Laser 4.7, 420, Topper and Optimist will form the largest Youth regatta and Irish Sailing’s primary talent spotting event of the year for the Academy and Junior classes when it sets sail over three courses from April 5th to the 8th, jointly hosted by the Royal St George Yacht Club and the National Yacht Club.