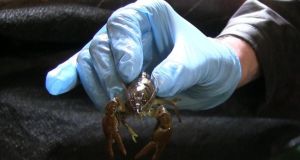 A Welsh conservation programme to save a highly endangered species is celebrating a major milestone after a captive-bred population has successfully spawned in the wild for the first time.

Experts from Natural Resources Wales (NRW) released native white-clawed crayfish in a tributary of the River Irfon, near Builth Wells, Mid-Wales, between 2012 and 2014.

Now they have found first-generation wild crayfish in the area – demonstrating that a new population has been established.

The white-claw is Britain’s only native crayfish and without intervention the species could become extinct in mainland Britain in 20 to 30 years.

Over the past decade the species has declined by up to 80 per cent worldwide. In the wild they have less than a 10 per cent chance of surviving to adulthood, compared to around 80 per cent in the hatchery.

To date, more than 5,000 captive-reared crayfish have been released into carefully selected ‘Ark’ sites in Wales.

The programme aims to offset the damage caused to the native crayfish population by the non-native American signal crayfish, climate change, habitat degradation and the impact of pollution on water quality.

The American signal crayfish, introduced for food production in the 1970s and 1980s, carries a plague which affects only the white-clawed species.

Oliver Brown, Fish Culture Officer for NRW, said: “This is a great legacy for the Irfon Special Area of Conservation Project which is led by the Wye and Usk Foundation.

“The project included a number of actions to improve water quality and habitat such as sand liming, restoring a peat bog, coppicing and fencing.

Finding these wild-born offspring from our captive-reared programme proves that this could be a valuable tool in safeguarding the species for the future.

The white-clawed crayfish is described as a keystone species, consuming detritus and almost acting as engineers in the aquatic environment.

Their presence is an indicator of good water quality, as they are very sensitive to pollution, so their continued presence at the release sites is really encouraging.”

In his talk Ken Whelan will review some of the challenges facing those managing wild brown trout populations in the western lakes and ask if lessons can be learned from modern strategies being adopted to manage sister species such as salmon and sea trout.

On the Drowes, an additional three salmon were recorded last week along with three hooked and lost. Marty King has a fish on prawn from the Wash Stones; Brett McKee’s fish took a worm from the Mill Pool and Joe Broderick accounted for a fish on prawn from The Meadow. With the increasing salmon run, prospects look good for the coming week.

Despite Storm Emma delaying the Carrigavantry Cup Charity Competition by one week, the one-day event in aid of RNLI went ahead last weekend with 22 anglers taking to the water at Knockaderry Reservoir in Co Waterford.

Prior to the start, Austin Flynn from Helvic Head lifeboat station held a lifejacket clinic for competitors which, in hindsight, proved very worthwhile. One had a loose cylinder, another a firing mechanism starting to rust, both of which probably would have failed in an emergency.

The heavy rain throughout most of the day failed to deter the anglers and a great catch of 70 trout was recorded with all fish returned to fight another day. Robert Crichton emerged a clear winner with seven fish for 318cm, followed by Brian Brennan, also with seven for 308cm. In third place, Pat Hoare managed six for 263cm.

The following day on Knockaderry, the Owenabue Club from Cork held a competition and again, the fishing did not disappoint as 20 anglers recorded 77 trout (all returned). Indeed, several competitors fished both competitions and the local B&B’s were full and a great night was had by all in O’Donnacha’s Pub in nearby Kilmeaden.

Groups or clubs wishing to have a good fly fishing experience on Knockaderry or Carrigavantry Reservoirs, should contact Michael Sheehan, 086-107 3086.