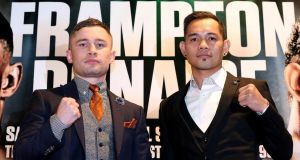 Carl Frampton’s fight with Nonito Donaire on April 21st will be for the WBO interim featherweight title. Photograph:

Carl Frampton’s fight with Nonito Donaire on April 21st will be for the WBO interim featherweight title, promoter Frank Warren has announced.

The winner of the already-significant fight, at Belfast’s SSE Arena, will therefore earn the right to challenge defending WBO featherweight champion Oscar Valdez, of Mexico.

Frampton, 31, is expected to next fight the winner of May’s match-up between Josh Warrington and IBF champion Lee Selby should he overcome 35-year-old Filipino Donaire, but he said: “Oscar Valdez must face the interim champion when he is ready and that’s a big incentive.

“The Valdez fight is very appealing to me and obviously the winner of Selby-Warrington is also equally as appealing. The Valdez fight would get a lot more attention on both sides of the globe rather than just in the UK.

“The winner of Selby-Warrington would be a big fight in the UK but a fight with Valdez would be a huge worldwide. Obviously he has an injury that he needs to recover from but there’s a lot of options for me now and it’s always good to have options in this game.”

Valdez, 27, earlier this month made the latest defence of his title when defeating Frampton’s long-term rival Scott Quigg, but suffered a broken jaw en route to victory.