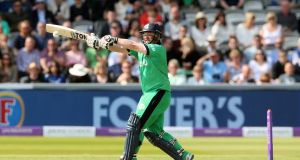 Paul Stirling top-scored for Ireland in the 107-run defeat to Zimbabwe at the World Cup qualifying event in Harare. Photograph: Andrew Fosker/Inpho

Ireland’s hopes of qualifying for the 2019 World Cup hang by a thread after an abject batting display saw them suffer a 107-run defeat to hosts Zimbabwe in Harare on Friday.

Chasing a modest 212 on a slow pitch, Ireland were bowled out for just 104, with opener Paul Stirling making 41 of those before being run-out in a mix-up with Gary Wilson.

Stirling’s departure came with the score on 86 for six and with it went any hope of victory as Zimbabwe skipper Graeme Cremer ran through Ireland’s tail with his leg-spin to finish with three for 18.

Eight wickets for spin looked to make a mockery of Ireland’s decision to go into the game with just one front-line spinner in Andrew McBrine, with George Dockrell and Simmi Singh left out.

Even still, Ireland’s bowlers had Zimbabwe in trouble on 87 for five in the 21st over after winning the toss, only for Raza to lead his side to a decent total with an undefeated 69 from 83 balls as the home side rallied.

Chisoro backed him up brilliantly, making 21 in a 42-run partnership for the eighth wicket that was ended by Ireland opening bowler Tim Murtagh, who finished with three for 36 from his 10 overs.

Ireland lost in-form skipper William Porterfield in the fourth over and Andrew Balbirnie went to a fine catch behind the stumps from Brendan Taylor off an inside edge from seamer Kyle Jarvis.

Ed Joyce has saved many a game for Ireland, including key World Cup qualifiers, in the past, but he went in bizarre fashion as he lifted his back leg out of the crease thinking he had run the ball off his pads and past Williams for a leg bye. He kept on going as the wicketkeeper whipped off the bails to leave Ireland on 18 for three.

Ireland still had plenty of batting left but it was only Stirling who made any really impact and he had built a useful partnership of 32 with Wilson when Stirling pushed a defensive shot in to the off-side and set off for a single. Wilson didn’t react and Stirling turned back a third of the way down the pitch, only to be run out easily by Raza.

Porterfield admitted that confidence was high in the Ireland dressingroom at the interval having restricted Zimbabwe to 211 for nine from the 50 overs.

Ireland remain in fourth position in the Super Sixes table on two points, with Zimbabwe joining Scotland at the top of the table on five points, those two sides filling the qualifier places with two rounds of games to go.

Ireland will need to beat Scotland on Sunday and Afghanistan next Friday to have any chance of climbing up to one of the two qualifying spots. In all likelihood they will also need a few favours in other matches also.

1 Gordon D’Arcy: There’s more to Saracens’ success than money
2 Aston Villa strike at the death to pull clear of the drop zone
3 Solskjær can’t guarantee Rashford will play again this season
4 O’Donoghue says Limerick will let their hurling talk in 2020
5 Rowe and Dublin ready to get back down to business
Real news has value SUBSCRIBE