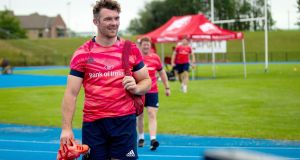 Peter O’Mahony at a recent Munster training session ahead of the the restart of the Pro 14 season in August. Photograph: Inpho

Peter O’Mahony correctly declined to comment on Wednesday on the current ongoing wage discussions with the IRFU as he is on the board of Rugby Players Ireland (RPI) and would have been hopelessly compromised in whatever he said. RPI interestingly, is partly funded by the IRFU.

Speaking at a sponsor’s event the Irish flanker and others are at stalemate with their employer regarding proposed 20 per cent pay cuts.

While fully respecting O’Mahony’s position to say nothing he could have reinforced a number of things. He could have said that rugby players fully acknowledge the current dramatic financial conditions and are enthusiastic about doing their fair share of heavy lifting.

Without going into details, he could have emphasised that the players understand many Irish people, including those who pay money to watch the four provinces and Ireland, have accepted furloughing, salary reductions, and job losses, many of them with no hope of ever recovering what has vanished over the last four months.

But he didn’t, probably because the issue has become so sensitive with people divided on which side they fall, a faltering IRFU struggling in a commercial calamity or the heroic Irish outhalf, flanker or tighthead prop financially diminished. An administration or a personality, we all know where people fall in that choice.

A problem is that rugby is a business and adheres to business models. It has always been run as a business and the IRFU have been credited for being prudent and maintaining a healthy sport. They have taken hard, sometimes cruel business decisions over the years, cut loose Simon Zebo, forced out Paddy Jackson and Stuart Olding to maintain a wholesome image. They will also see this crisis as opportunity.

But it’s easy to see rugby not as a business. It is easy to argue the case of exceptionalism, believe in the short careers conferring on players a special category of employee, believe that being exposed to the threat of career-ending injuries makes a special case.

People understand injury is a threat and that many careers naturally end in their mid 30s. That is already recognised by the State in the Finance Act of 2002, which enacted Section 480A of the Taxes Consolidation Act, 1997. There is tax relief for certain classes of sportspersons on their retirement.

The relief recognises the short career and limited earning capacity most professional sportspersons experience in Ireland and under certain conditions professional players can claim a tax deduction of 40 per cent against gross receipts for up to 10 years.

The act was introduced by Charlie McCreevy during Ireland’s Celtic Tiger years. Among other things at the time he said he wanted to help athletes who have a relatively short career to earn substantial money.

He said professional sports people with relatively low earning power such as National Hunt jockeys, League of Ireland soccer players and rugby players would benefit most from the scheme. But is their income low?

According to an article in the Racing Post in February of this year the average jump jockey takes 215 rides a year. After deductions of valet, agent and Professional Jockeys’ Association, if they receive three-quarters of each riding fee, that puts the average gross annual income from riding fees at £26,500 (€29,370).

There are other revenue streams such as retainers and prize money which increase income but the riding fee is the jockey’s basic source of earnings. The average Flat jockey (taking out the likes of Frankie Dettori and Ryan Moore) meanwhile, has 300 rides a year. That puts their gross annual income at £27,150 (€30,000).

That is not including personal sponsorship deals, cars and win bonus payments. Heroic national figure or not, good luck to a player on €500k or €200k in finding broad support in refusing a 20 per cent pay cut. People just see what players get, not what they are losing.

Another aspect is that some players are business men too, involved in the private sector. They understand how depressed the market is. Their businesses outside of rugby have also been forced into making hard reality calls.

Sure people will support the players because they badly miss the game, because players bring so much joy and entertainment and because they actually are exceptional in what they do.

That’s why over a 10-year career a senior professional player can earn millions of euro. But they don’t just stop working then. They begin new careers. There is an important point here.

Industries have changed. People are no longer guaranteed to stay in the same job for life, with professional athletes obviously no exception. To argue there is no income after a rugby career ends is a fallacy. The short rugby career is the first career, not the only career.

There is a blurring of the lines and probably broad agreement that rugby players provide more social capital and generate greater emotional investment than say a commodities trader.