Who writes the cheques has never been a concern for boxers 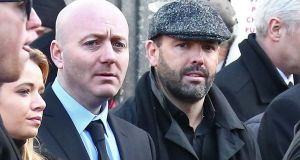 ‘Fat’ Freddie Thompson and Daniel Kinahan at the funeral of David Byrne who was shot dead in the Regency Hotel attack. Photogtaph: Collins Dublin.

In the 1950s the gift America gave to the world, The Mob, made the fight game a kind of shadowy chic enterprise. Ringside seats at heavyweight title fights were status symbols. They still are.

In the 1970s the sweet science was handled by promoter Don King and a career highlighted with “The Rumble in the Jungle” and “Thrilla in Manila” both involving the revered Muhammad Ali. He also promoted George Foreman, Larry Holmes, Mike Tyson, Evander Holyfield, Bernard Hopkins, Félix Trinidad and Roy Jones Jr.

King was charged with killing two people in incidents 13 years apart. In 1954, he shot a man in the back after he had tried to rob one of his gambling houses, the incident ruled a justifiable homicide. In 1967, King was convicted of non-negligent manslaughter. He stomped one of his employees to death and served three years and 11 months in prison.

The world came to see King as an eccentric quotes machine and, before Trump, he had hair deserving of its own Wiki page.

In amateur boxing, under then president CK Wu, AIBA risked bankruptcy after investors demanded it pay back millions of euro in loans and investments. Azerbaijani company Benkons sent a letter demanding repayment of a €9 million loan from 2011. The €9 million was subsequently found to have gone ‘missing’. International auditor KPMG refused to certify the accounts for the years 2015 and 2016.

Wu was replaced by Gafur Rakhimov as head of amateur boxing. The Tashkent-born administrator was accused of being one of Uzbekistan’s “leading criminals” with “links to the heroin trade” by the US Treasury.

In 2012 the US Department of the Treasury issued financial sanctions after accusations of his being part of the so-called ‘Brothers’ Circle’ criminal organisation. Rakhimov, like Daniel Kinahan, has never been convicted of a crime.

These ‘amateur’ administrators represented Katie Taylor, Michael Conlan, John Joe Nevin, Kenneth Egan and Paddy Barnes, all Irish Olympic medal winners. In Rio Conlan gave boxing and the IOC the finger. All those judges he insulted have been banned from Tokyo 2021. The rose-tinted glasses about the pristine condition of amateur boxing can be placed in their box. As one prominent boxing coach said recently: “The professional boxing is just as corrupt as the amateur.”

One-time amateur Tyson Fury, who has agreed to fight one-time amateur Anthony Joshua in the biggest professional heavyweight fight in British boxing history, is of Traveller decent and calls himself “The Gypsy King”.

You look closely at boxing and you see great athletes from the margins, the disadvantaged and those who have suffered prejudice, many of them belonging to communities Kinahan’s industry has hurt most. You see west Belfast, you see inner city Dublin.

You see the high social value of boxing too. A sport that goes where others don’t, all lost in the current wave of outrage. Recently it has been turned into a zero sum game of all good or all bad because of one character.

You see a deal between Eddie Hearn and Frank Warren and wonder how two of the biggest promoters in the world, who despise each other, could come together. The catalyst is Kinahan. Fury was effusive on Instagram name checking ‘Dan’ and ‘Daniel’ three times. He doesn’t care. Now there are calls for boxers like Fury, from the margins to be again marginalised.

Fury triggered a tsunami of outrage and MTK, the boxing promotions company with ties to ‘advisor’ Kinahan, has become toxic. But only in Ireland. The blanket ban of their events on Irish media was heavy-handed and ‘Iron Curtain’ authoritarian, while a recent interview with MTK Global ceo, Sandra Vaughn transparent propaganda.

Fury, however, isn’t propaganda. Fury is real. Fury has become a larger-than -life font of opinion, his sexist and homophobic remarks venal and deeply offensive. But despite the flaws he remains, in the mould of former heavyweight champion Frank Bruno, loved.

Whatever about Kinahan’s history, there are over 100 boxers from Kazakhstan, Afganistan, Iraq, Kurdistan, Russia, Brazil, Britain and here attached to the MTK stable, who cannot afford fever-pitch levels of moral outrage. There are many more who don’t even feel it, don’t feel the Dublin gang feud and the 18 dead.

The boxing world doesn’t care about Kinahan’s background. Nor does it care anymore than golf about the genocide in the war between Yemen and Saudi Arabia, the country favourite to stage this agreed 2021 mega-money spectacle.

But Fury represents what many in boxing feel and believe, which is what’s new in all of this? Boxing is a survival game. At a personal level you survive the sometimes lethal brutality. At an organisational level you survive the people in it and the sinister carousel that keeps turning. You make money and you try to survive having it. The ring is their coliseum. Who is paying the cheque has never been a high priority.

That is the history of boxing.