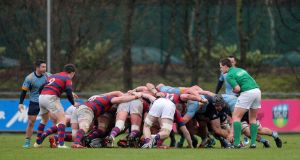 Action from the Energia All-Ireland League Division 1A match between UCD and Clontarf at Belfield back in February. Photograph: Brian Reilly-Troy/Inpho

The IRFU have outlined structures for the coming season in relation to club rugby and a fixture schedule of interprovincial matches and Sevens tournaments for academy players.

The club season will be split into two stages, the first which will ensure all games will be initially localised in terms of province, friendly and competitive fare, from September through to December. To guarantee competitive rugby in the initial tranche of the season, all AIL clubs will be divided into conferences within their respective provinces and will compete in the ‘Energia Community Series’.

There will be an opportunity to win silverware and also earn qualification for a number of All-Ireland cup competitions, including the Bateman Cup. Stage two will see a reformatted AIL commence on January 9th.

It will consist of a nine-game league season with semi-finals and finals in all men’s and women’s divisions. The size and make-up of each 10-team division will retain the current status quo. As the new league is an abbreviated format there will be no promotion or relegation.

IRFU rugby committee chair Greg Barrett said: “Our Return To Rugby Guidelines For Clubs mapped out a ‘safety first’ approach and we continue to be guided by this and the work of IRFU medical director Rod McLoughlin as we build towards a resumption of competitive rugby in 2020.

“While there are many factors which helped shape this season outline, you will see that player welfare and Covid-19 risk mitigation are by far the biggest consideration. We are also hopeful that a focus on keeping rugby at a localised level in the first stage of the season brings with it an opportunity for clubs to re-energise their membership.”

The Union also outlined a competitive shape to the season for the four provincial academies who will return to their respective designated high performance centres on July 20th. There they will complete an eight week pre-season before joining senior squad members to compete in a series of A fixtures in late September and early October.

There will also be three interprovincial Sevens tournaments during this period which will see academy selections compete with the Ireland Sevens squad. Peter Smyth, IRFU head of elite player development, said: “It is important that we provide our contracted academy players with a safe and contained environment in which to re-condition after the shutdown and to prepare for a return to competitive rugby in September.

Ireland’s under-20 fixtures will be confirmed in due course.

1 Madigan’s primary goal is Ireland caps after switch to Ulster
2 Seán Moran: It won’t take much before cancelling All-Ireland looks like a solution
3 My sporting disappointment: Battered, bloodied, broken by The Wall
4 View from Melbourne: Sporting fabric of the city suffering from second lockdown
5 Heroic insanity: When Michael Dunlop raced home in memory of his father
Real news has value SUBSCRIBE