In time the events will stand alongside Heysel, Ibrox and Hillsborough as avoidable catastrophe 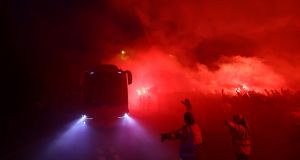 The Liverpool team coach arrives at the stadium as fans let off flares prior to the Champions League round of 16, second leg match against Atletico Madrid at Anfield on March 11th. Photograph: Julian Finney/Getty Images

The patriot came from the direction of Turf Lodge sweeping down the grass shrieking and flapping as soon as we could see him baring over the rise of the hill, a black jacket, dark trousers, a cap. Trouble.

His walking stick was whirring above his head. He was the most serious and angry old dude we had ever seen.

We were playing cricket on the GAA pitch in the Falls Park in Belfast. Well, an approximation of cricket. Two red bricks were the stumps. A hurly was the bat and a white tennis ball was being bowled. We vanished lickity spit.

If there is a threat, if someone is waving a big stick, it’s always best to pull up the stumps and run like shite. It’s the right thing to do. Every self respecting street urchin knows that.

This week numbers emerged from Liverpool and Cheltenham. The Liverpool number was 41 and the Cheltenham number was 37. Both numbers are linked deaths to sport.

People should have seen the stick. They should have reacted to the threat. It was visible. It was coming right at them angry and fierce. But nothing was done. People walked towards it. They didn’t run away.

The numbers come from a study that has claimed Liverpool’s Champions League fixture with Atletico Madrid on March 11th, when the pandemic was raging, led to an additional 41 coronavirus-related deaths. The Premier League leaders hosted the Spanish giants at Anfield in front of 52,000 fans, 3,000 from Madrid.

According to statistics, the cases of virus infection in Liverpool increased right after the football match as travelling fans mingled with locals. The sinister aspect is that the fans who attended the match caused the damage, while people who were entirely innocent and may have had no connection at all with the football were the ones who became infected and died.

It’s highly unlikely the younger people who were initially infected died or even become ill. But the older people they brought the virus back to did die. For the racegoers at a swollen Prestbury Park it was a reported 37 additional deaths for a total between the two events of 78 dead.

In 1971 a crush at Ibrox Park where Rangers were playing Celtic led to the death of 66 people, then the worst British football disaster until Hillsborough in 1989. Scottish Sherriff James Irvine Smith later ruled in his damages statement that “the said accident was due to the fault and negligence of the defenders, Rangers FC.”

In 1985 at a match involving Bradford City and Lincoln City a wooden stand caught fire and 56 people were killed. That same year in May the Heysel Stadium disaster resulted from a human stampede at the European Cup final in Brussels between Liverpool and Italian side Juventus. Fans were crushed against a collapsing wall.

When the count was over 39 people had been killed and 600 injured. The number of deaths linked with the recent Liverpool v Madrid match is higher than those killed in Heysel Stadium.

That tragedy resulted in all English football clubs being placed under an indefinite ban by Uefa from all European competitions. It was lifted in the 1990-91 season, with Liverpool excluded for an additional three years, later reduced to one and 14 Liverpool fans found guilty of manslaughter and each sentenced to three years’ imprisonment.

The disaster was later described as “the darkest hour in the history of the UEFA competitions”.

Hillsborough in 1989 caused the deaths of 96 people. An FA Cup semi-final between Liverpool and Nottingham Forest ended in carnage and more crushing. There was a Taylor Inquiry and a Judicial Inquiry and a Hillsborough Independent Panel, which critically concluded that the fans who died were not at fault.

The main cause was “lack of police control”. Families subsequently called for prosecutions for unlawful killing and corporate manslaughter.

If we are to believe the scientist, Tim Spector, a professor of genetic epidemiology at Kings College, London, who is leading the UK’s largest Covid-19 tracking project, the racing festival and the Champions League match should not have gone ahead. His view that they caused ‘increased suffering and death’ backs up the numbers.

British health secretary Matt Hancock said he believed there would be a review into the matter at some point. But he sounded weak and uncommitted. In Ireland there has been hand wringing and little else about the tens of thousands who returned.

Now that numbers are emerging, epidemiologists might enquire or trace where Irish infections came from. It seems inconceivable from what we know about the nature of the spread of virus and the numbers who travelled that nobody carried infections home.

At the time Irish Minister for Health Simon Harris said people returning were under no obligation to self-isolate since the UK was not a high-risk country. Wrong then. More wrong now.

Sports organisations have not had a happy history in looking after their own. In time Anfield and Cheltenham 2020 will stand alongside Heysel, Ibrox and Hillsborough as avoidable catastrophes. Right now though, something is missing from the dialogue.

But if an old man moved by history can come shaking a stick at kids because the lines painted on a piece of grass are wrong for the game they are playing it begs one question. Where has our outrage gone.

1 Game Changers: Gary O’Toole took a stand when others turned their heads
2 Gerry Thornley: Munster will make for interesting case study when rugby resumes
3 Georgia and Fiji in line to join Six Nations sides in eight-team tournament
4 Roger Wilson tackling the problem of bad technique in Texas high school football
5 James McClean says he gets no support for abuse he receives
Real news has value SUBSCRIBE
Here is your handy guide to sport on television this week