Given how the league dealt with quarterback’s own protest, their reponse is tone deaf 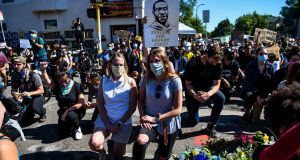 Protestors in Minneapolis kneel down as they protest at the makeshift memorial in honour of George Floyd, who died while in custody of the Minneapolis police. Photo: Chandan Khanna/AFP via Getty Images

Even in a world so skint of shame, it was possible to be shocked by the sheer gall of the NFL over the weekend. As riots flared through city after city across America in the wake of the George Floyd killing, there was no escaping the sense that you were watching a historic time in that country’s life. The last weekend in May 2020 felt like a reckoning, even if time and history and experience warns us to know better.

Whether it turns out to be the case or not is a different matter. Point is, in the here and now, you could feel it. Even from an ocean away. All the news you watched, all the bits you read, all the stuff that flashed across your phone. Pixels and pinpricks of a dark, foreboding snapshot in time.

Into the maw of which the NFL Commissioner Roger Goodell inserted himself and his league on Saturday evening. As ever, the steepling self-importance of a multi-millionaire sports executive meant he ignored the number one rule of public statements - it’s better to stay silent and be thought a fool than to speak and remove all doubt.

“The NFL family is greatly saddened by the tragic events across our country,” went Goodell’s statement. “The protesters’ reactions to these incidents reflect the pain, anger and frustration that so many of us feel.

“Our deepest condolences go out to the family of Mr. George Floyd and to those who have lost loved ones, including the families of Ms. Breonna Taylor in Louisville, and Mr. Ahmaud Arbery, the cousin of Tracy Walker of the Detroit Lions.

“As current events dramatically underscore, there remains much more to do as a country and as a league. These tragedies inform the NFL’s commitment and our ongoing efforts. There remains an urgent need for action. We recognize the power of our platform in communities and as part of the fabric of American society. We embrace that responsibility and are committed to continuing the important work to address these systemic issues together with our players, clubs and partners.”

Reading through some of that, you would be forgiven for thinking this NFL crowd are a just and woke collection of right-on dudes. All the fine phrases get a touch – the greatly saddened, the pain, anger and frustration, the deepest condolences. And if you were in a charitable mood, you could even swing with all the good talk of an urgent need for action and embracing responsibility and addressing systemic issues. My my, what a world we will have when the heft of the NFL is brought to bear on all its ills.

Nobody is buying it, of course. Not when the memory of Colin Kaepernick is so fresh in everyone’s mind. The San Francisco 49rs quarterback was exiled from the league for kneeling in protest at police brutality against black communities back in 2016 and 2017. He sued the NFL in 2019 and the league ultimately settled out of court, handing over a reputed eight-figure sum to make it all go away.

That’s who the NFL are. The biggest sports league in America is first and foremost a rapacious entertainment business, with an annual revenue of $14bn. In front of the watching world, it had its chance to get on the right side of the systemic issues to which Goodell’s statement refers and instead it decided that the money lay along the other path. Kaepernick was left to whistle in the wind.

Goodell and his bosses - the billionaires who own the 32 teams - weren’t to know that karma would come visiting quite so soon and arrive wearing quite such a symbolic attire. The ultra-memeable counterpoint between images of Kaepernick kneeling in protest against police brutality and the Minneapolis cop kneeling on George Floyd’s neck must feel like terribly bad luck within the NFL. How are they to tell the next Kaepernick not to kneel when the whole world has seen a man’s life get extinguished in such a way?

In an ordinary world, we could marvel at the neck of Goodell and his organisation here. Of all the pathfinders, all the explorers who might lead America out of a time of such darkness, the notion that the NFL might present itself for the role is such an obvious nonsense that you could nearly admire the chutzpah involved. We know that it isn’t remotely true or sincere. Goodell has shown what the league’s priorities are and what they will remain.

As for us, the fans of the sport, we have to be honest about how much responsibility we bear for that. We are, after all, the reason Goodell can be so blithe and casual with reality. The NFL knows very well just how cavalier it can be with even the biggest issues and still retain its audience.

There were times in the Kaepernick saga that it felt like the biggest story in America, impacting all levels of society from dirt-poor black neighbourhoods to the White House. And yet it went away and we all stayed watching. More of us than ever, in more countries than ever.

The same will happen here. If and when they take to the gridiron this winter, Goodell’s weasely reaction to the events of the last week in May will be long forgotten. Finding a way for Sundays to be Sundays in America, even as the pandemic bomb keeps ticking, will be hailed as a miracle. There’ll likely be some kneeling rows for a while and it might get a little knotty here and there. But they’ll see it out in time and people will keep watching and cheering and eating and drinking and betting and all the rest of it.

This is nothing for us to be proud of. The least we can do is own up to it.