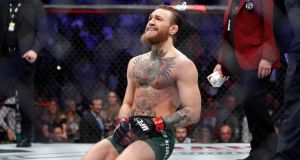 Conor McGregor has announced his latest retirement from UFC.

The controversial Irishman, formerly featherweight and lightweight champion and one of the biggest names in the business, tweeted the news following the conclusion of the UFC 250 event.

“Thank you all for the amazing memories! What a ride it’s been! Here is a picture of myself and my mother in Las Vegas post one of my world title wins! Pick the home of your dreams Mags I love you! Whatever you desire it’s yours.”

McGregor, who bows out with a 22-4 record, has made similar announcements in the past — previously ‘retiring’ in 2016 and 2019 before making his way back to the octagon.

He was just one bout into his latest comeback, having reversed his earlier decision to take on Donald Cerrone in a welterweight contest at UFC246. McGregor won via TKO in just 40 seconds, his first success in over three years.

A ‘superfight’ against fellow UFC great Anderson Silva had been on the cards this year, with the latter publicly touting the head-to-head over the weekend.

In 2017 McGregor took a high-profile detour into the world of professional boxing, going down in 10 rounds to Floyd Mayweather in a showpiece event in Las Vegas.

“I had my goals, my plans, the season. I had everything laid out. Obviously the world has gone bleeding bonkers at the minute. There’s f-all happening at the minute. They want to throw me up and down weights and offer me stupid fights. I don’t really give a fuck. I’m over it.”

UFC president Dana White seemed fairly relaxed about the uncertainty of McGregor’s UFC future, as well as that of Jones and Masvidal, due to the events currently gripping the world right now. Speaking at the UFC 250 press conference, he said in quotes on the organisation’s YouTube channel: “The amount of people I have gunning at me right now is insane. But here we are.

White says he had no forewarning about McGregor’s announcement but added: “That’s Conor. You know how Conor works and that’s how he does things. There’s been a handful of people that have made this really fun for me and Conor is one of those guys. When you look at the star power that Conor McGregor, the star that he became, he introduced this thing globally to people in places that had never seen it before or been interested in it.

“Conor McGregor is not going to need any money any time soon. He loves to fight, he’s passionate about it and he’s got an incredible fighter IQ. Whatever his reason is, when a guy says he wants to retire, don’t worry about it.”