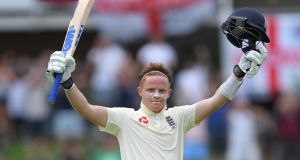 Now for the tricky bit. England’s pursuit of 20 South African wickets in this match has begun and it will require much hard graft and ingenuity plus the standard of support in the field that was to the fore in Cape Town for them to win this match. But they made significant inroads in the closing overs. By then South Africa were 60 for two and a long way adrift of England’s total of 499 for nine declared.

Joe Root had been able to declare early in the final session thanks to his overnight batsmen, Ben Stokes and Ollie Pope, posting centuries of high quality on a surface that seemed to hold few threats for hawk-eyed batsmen. A Stokes hundred is hardly headline news at the moment, such is his rich vein of form and his determination to exploit it.

But his partner’s century had the feel of a papal decree. The gist of the announcement is that the 22-year-old Pope is ready for the Test arena and he clearly enjoys the special buzz of Test cricket. In his sixth Test a major hurdle for an aspiring young batsman has been surmounted in some style. He already qualifies as a serious player.

As a consequence of their 203-run partnership England were never going be short of runs but the manner in which South Africa responded was mildly chastening and a reminder of the labour ahead. With Dean Elgar to the fore again they cruised to 50 in 11.3 overs with the minimum of effort. But then their progress was checked in a manner that might have been regarded as preposterous a fortnight ago. Dom Bess and Mark Wood, recent bystanders, combined to change the tempo of the match.

Bess was introduced early and in his third over he dismissed Pieter Malan amid some confusion, at least in the mind of the batsman. The ball was patted back to the bowler in the air; Malan did not budge, thinking that this was a bump ball, but the replay confirmed that he had contrived to give a gentle catch back to the bowler.

Now Root summoned Wood, who would exceed 90mph on several occasions. One delivery thudded into the elbow of Elgar, the toughest of nuts who welcomed some magic spray. As the clouds gathered Zubayr Hamza was startled by another lifting delivery. Suddenly there were possibilities for the fielders. Then Bess tried coming around the wicket to Hamza, a good ploy since he was immediately caught at short-leg by Pope a few minutes before rain intervened just as it had done in the morning.

In the first session Stokes did not waste any time before seizing the initiative. He soon played two crisp, punched pulls against Kagiso Rabada, who was participating in his final Test of the series thanks to his very close proximity to Root when he let out a roar of celebration upon dismissing the England captain on the first day. Such a celebration was not tolerated by the umpires or match referee, Andy Pycroft, and Rabada cannot play in Johannesburg after this latest misdemeanour given the number of demerit points he has already totted up.

No doubt the rules have been applied correctly but the outcome leaves a hollow feeling and the series is diminished as a result. At least England had not wittingly provoked the short-fused Rabada – there was the suggestion that this was the case during the tempestuous series between South Africa and Australia almost two years ago, during which Rabada kept gathering those demerit points.

Next Stokes turned his attention to Keshav Maharaj. Having sniffed which way the wind was blowing, he hit with it; the first six only just cleared a long boundary at mid-wicket; the second landed outside the ground. A total of 72 runs came from 13 overs in the first hour; Stokes passed 4,000 runs in Test cricket; in the meantime Pope was in impressive cruise control.

Soon Stokes had sped to his ninth Test century as the South Africans sat back and took their punishment; it was a chilling session for the new regime; up in Kimberley their youngsters were getting thrashed by Afghanistan in the Under-19 World Cup – though a few of the traditionally dominant sides may share this experience.

After lunch Stokes sliced a drive to give Dane Paterson his first Test wicket and the innings stalled for a while. Jos Buttler tamely hit a return catch to a grateful Maharaj, while Bess would also depart for a solitary run. But the rest made merry. Sam Curran sparkled, hitting 44 from 50 balls, Wood made this seem pedestrian, smashing 42 from 23 balls including five sixes off Maharaj; he swung so hard that one feared another injury.

There was one oddity. With the score on 467 for eight Wood was caught at mid-on off Rabada and duly set off for the pavilion, soon to be followed by Pope when it became apparent that Root had declared. Then it transpired that Rabada had overstepped. So Root undeclared and the innings – and the mayhem – continued, confirmation that this was certainly not Rabada’s day. But it was Pope’s.

His debut century was the most polished of innings; there was a lull when he was in the 80s and 90s when he may have been distracted by the impending landmark. But his technique was sound, his strokeplay reassuringly orthodox and seldom fallible – until he produced an array of ramp shots against Rabada just before the declaration. Pope’s composure at the crease suggests that he belongs at this level and that he will be around for a while. – Guardian

Hugo Lloris preserves Spurs’ dignity to keep them alive for trip to Leipzig 22:46
Manchester City see off West Ham without needing to leave first gear 22:49
Rashford ‘touch and go’ to play again this season – Solskjær 22:30
Limerick advance to Munster U20 football semi-final after beating Tipperary 21:20
Willie Mullins manoeuvring his Cheltenham forces into position 19:30
Here is your handy guide to sport on television this week