TV View: If you’re climbing the walls, stick at it and you could get to Tokyo 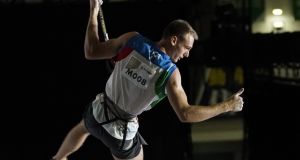 Italy’s Ludovico Fossali in action during the Speed event at the IFSC Climbing World Championships at the Esforta Arena in Hachioji, Tokyo. Photograph: Toru Hanai/Getty Images

How are you doing? Climbing the walls? Well, there’s some good news on that front – climbing walls is now an Olympic sport, having been included in the programme for Tokyo, so it could be that a rake of us will qualify to represent Ireland next year, so much practice are we getting.

Although, having watched the 2019 Climbing World Championships on Eurosport on Sunday, like you do, the bad news is that the competition is quite fierce.

Now, there was some controversy when the International Olympic Committee gave climbing the nod for Tokyo, some even disputing that it was a sport at all. Its defenders had only to say ‘Dressage? Hello?’ to quieten them down, and point to other ‘sports’ that have made it into the Olympics over the years. We know about the carnage that was pigeon shooting, for example, and in 1900 even life-saving was a trial event, the gold medallist presumably the person with the least number of drownings.

Besides, when the IOC announced its decision, Nick Colton, the deputy chief officer at the British Mountaineering Council made the not unreasonable point to the BBC that “climbing represents the only basic human movement not yet included in the Olympics” – aside from sourdough stirring – so its inclusion was long overdue.

But even among climbers themselves, there was some grumbling, their chief complaint being that to medal you have to shine in all three of the included disciplines – bouldering, speed and lead climbing – all of which will be scored equally. And so unique do they believe each discipline to be, with many climbers specialising in only one, this would be like our hockey team having to excel in the Greco-Roman wrestling and pole vault as well to medal in Tokyo.

It was the speed event from Hachioji, Japan last August that Eurosport was airing when we accidentally stumbled upon it while looking for the Food Network.

They have, no doubt, long since tired of being likened to Spider-Man, but next time you see Spider-Man climb, say, the Empire State Building, you’d honestly go ‘meh’. And he’s a slouch next to this lot who reach the top of their walls in a rather lightning manner with the assistance of only a few skimpy footholds.

It was for that reason that the Eurosport commentator seemed a bit harsh when he said of the men’s final between Italy’s Ludovico Fossali and the Czech Republic’s Jan Kriz: “Not a classic! Full of mistakes!” It was over in seven seconds so, to the untrained eye, there wasn’t even time to make a mistake.

Harsh, too, was his view that from here on in Fossali should be known as Lucky Ludovico because en route to the final one of his opponents had fallen off the wall and two had been disqualified for false starts. Life had given Fossali lemons and he’d made lemonade, so he had no need to apologise for his good fortune.

One nice thing, incidentally, about this sport is that the bronze-medal race is called the ‘Small Final’, which is the kindest name ever for a contest between a pair of losers who failed to make it to the golden finale. That actually made us think of Roy Keane. “Small final? SMALL FINAL?!” Him being the fella who probably put any runners-up medals he ever picked up in the nearest incinerator.

On Match of the Day’s latest telly podcast thingie on Saturday night, when Roy was chosen by Ian Wright and Alan Shearer as the Premier League’s greatest ever European import (the chief surprise here being the acknowledgement that Irish players aren’t actually British), Wrightie reminisced about the time he arranged to meet Roy for lunch.

Shoddy time-keeping, then, has Roy climbing the walls.

5 Joey Carbery set for Munster return against Cardiff on Friday