Mary Hannigan: The weekend’s sport confirms some things are stranger than ever 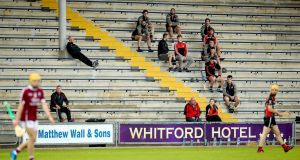 There was something very comforting about switching on TG4 on Friday evening and seeing Oulart-The Ballagh manager Liam Dunne standing there in his “Stafford Smokeless Coal” baseball cap, the most GAA-ish sight imaginable. The lockdown was over, for the club game at least, and so elated was Liam his beaming smile would have lit up Wexford Park if he’d still been there at midnight.

Only 200 were allowed in the grounds, though. “What will it be like playing in front of just a handful of supporters?” Micheál Ó Domhnaill asked him.

And TG4 didn’t use fake crowd sounds either for his team’s Wexford hurling championship game against St Martin’s, which was a good thing; that way we could hear the clash of the ash, which let us know that things are getting back to normal-ish.

Elsewhere, though, it still feels far from normal. In fact, between umpires disinfecting cricket balls, Jack Nicklaus beating Tiger Woods in The Open, one-’undred-and-eighteeeees being greeted by deafening roars from imaginary crowds, and Leeds getting back in to the Premier League, it’s stranger these times are getting.

Considering where some bowlers rub the ball to try and get a shine on it, in the hope of producing some swing, cricket umpires should probably have been using disinfectant wipes since forever. Although on this occasion it was the forgetful application of saliva by England’s Dominic Sibley that caused the problem, necessitating that the umpire do a bit of scrubbing. Until that moment, David “Bumble” Lloyd thought he’d seen it all.

But while those tasked with pressing the crowd-sounds buttons for soccer matches have a host of choices – eg boooooo, oooooh, aaaaah, urrrrgh, snaaaaaarl, yaaaaay, wooohoooo, clap-clap, etc – the darts people only have two buttons: “oooooh” for when someone misses a double top, and “yaaaaay” for when they hit 180 or check out.

“It’s a wee bit weird,” said Gary Anderson after he’d won his first round tie, before which the MC had introduced him to the empty room – “Laaaaaaaadies and gentlemen . . . it’s Gaaaaaaaaaaary Anderson!” – and he’d had to walk out to the strains of Jump Around despite having nobody to fist bump apart from the MC and his opponent.

At least Sky didn’t have Gary playing against, say, the late Jocky Wilson, because he might have found that a bit weird.

But on the weekend that the British Open should have been played, Sky brought us The Open For The Ages, which was both humongously weird and strangely fantastic.

“There go Jack and Tiger, tussling as they go towards the 17th,” said Ewen Murray, while Butch Harmon purred at the highly epic nature of the not-real contest.

If you’d just happened upon it all, without hearing that this Open featured “50 years of archive footage expertly woven together with modern graphics and new commentary to imagine a championship contested by the legends of the sport, including Nicklaus, Woods, Ballesteros, Watson, Faldo and McIlroy”, then you’d have been checking if hallucinating was a Covid symptom.

Nicklaus and Woods weren’t, then, the only two men competing – our own Pádraig Harrington, for example, tied for 14th with Lee Trevino, although that was seven places higher than Arnold Palmer managed. In fairness, though, Arnold must have a hell of an engine at this point.

It was a nail-biter in the end. “An Open for the ages! Won by Jack William Nicklaus! A thrilling afternoon and a worthy champion!” At this point you half suspected that Ewen half believed that this was virtually half real.

As for the soccer. Well, some of us were sad enough to watch Norwich vs Burnley, 90 minutes plus added time of our lives we’ll never, ever get back. Putrid, like. The sole highlight? When Efan Ekoku attempted to praise Burnley keeper Nick Pope.

“Turns out this guy is pretty special between the sheets.”