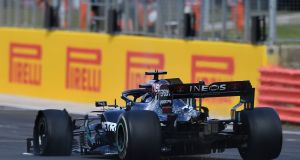 Lewis Hamilton won the British Grand Prix for the seventh time, coming home after last minute drama almost ended his race with a puncture on the final lap. He crawled round on three wheels, dragging his car over the line just seconds in front of Red Bull’s Max Verstappen in second. The Dutchman had pitted just beforehand to take new tyres to go for the fastest lap, had be not done so the win would surely been his.

The British driver’s Mercedes teammate Valtteri Bottas had been with him for most of the race until the Finn had too a front left puncture with two laps to go and finished in eleventh. The two Mercedes had been nonetheless comfortably clear of the rest of the field, their superiority this season plain to see through Silverstone fast corners. Ferrari’s Charles Leclerc was in third, with Renault’s Daniel Ricciardo in fourth and McLaren’s Lando Norris in fifth.

The late spectacular drama enlivened what had been a straightforward affair. Hamilton had control almost from the off and after he and Bottas had quickly built a lead, the pair settled into a somewhat uninspiring run to the flag. Hamilton had his teammate bested from the off and the Finn did not get close enough to mount a challenge. It is 70 years since the old airfield hosted the very first F1 world championship race in 1950, won by Giuseppe Farina for Alfa Romeo . The Italian marque completed a clean 1-2-3 sweep that day, and Mercedes were in similar control this time. Until the wheels came off in the dying moments.

Hamilton’s 87th career win, his seventh at the British Grand Prix ensures yet another record has fallen to the British driver. He has one more victory in his home race than the previous best of six held by Alain Prost in France. Few milestones remain and none seem beyond Hamilton now. He is only four behind Michael Schumacher’s record of 91 race wins, a tally which will surely fall to him this season. On this form and with Mercedes in a two-horse fight for the title, Hamilton is clear favourite to match Schumacher’s seven drivers’ titles, he now leads the championship with 88 points, a full 30 in front of Bottas.

After complaints from the drivers after a rushed and disorganised gesture in Hungary and Hamilton addressing the sport’s leaders, the FIA and F1 organised a set time and presentation for the drivers to make an anti-racism statement on the grid. They had all made individual televised anti-racist statements before hand and then lined up together before the national anthem. They were all present and wearing “End Racism” t-shirts, Hamilton and the majority once more took a knee but the split with some drivers still unwilling to do so remained. Seven drivers stood, Kevin Magnussen joining the six who previously done so, Max Verstappen, Charles Leclerc, Kimi Raikkonen, Daniil Kvyat, Carlos Sainz and Antonio Giovinazzi.

Hamilton had a slow start and was almost passed by Bottas thought the first corner, just clinging to his lead on the outside line of Abbey. Bottas was cautious, easing at the apex where he could have legitimately squeezed Hamilton. It was, until the death, the only moment of the race he was threatened

A safety car was deployed on the opening lap as Kevin Magnussen went off after tangling with Alex Albon. Racing resumed on lap six and Hamilton quickly demonstrated the pace advantage they held, putting four seconds on Verstappen by lap eight. For Ferrari the chasm they face this season was starkly illustrated, Leclerc was 12 seconds off the lead with just 10 laps completed.

Daniil Kvyat appeared to lose the rear in his AlphaTauri and went off at the entrance to Maggots, a very high speed crash with a major impact but the driver emerged unscathed. The incident brought out the safety car once more on lap 13 and the teams used the opportunity to pit and take the hard tyres – their only stop of the race completed.

Bottas stayed in touch with Hamilton, keeping him honest to within just over a second but apparently unable to close enough to threaten the world champion. By half distance Hamilton had two seconds on his teammate and looked entirely serene leading the race.

Behind him Leclerc was chased down by both McLaren’s having another fine afternoon in already impressive season. Sainz and Norris were up to fifth and sixth, comfortably the strongest of the midfield teams and a clear threat to Ferrari this season.

Relentlessly in control out front however the two Mercedes were managing the race in a controlled if entirely unspectacular fashion. They had 10 seconds on Verstappen by lap 33 and their run to the flag remained untroubled. Hamilton was enjoying even more pace in the final stags, putting eight seconds on Bottas as the flag beckoned. Then the left fronts went for both drivers. Bottas had no choice but to pit, Hamilton had simply good fortune to thank that he was on his final circuit and could nurse his crippled car across the line. – Guardian