Marian take on Killester in men’s final, while women’s final will see a first-time winner from either Liffey Celtics or Brunell 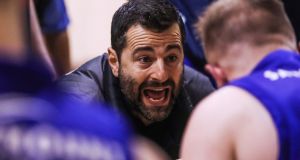 Marian coach Ioannis Liapakis: “Last year we played the occasion, not the game – that was our biggest mistake, and we’re going to try and avoid that this year.” Photograph: Tommy Dickson/Inpho

Friday will see the biggest weekend in Irish basketball tip off at the National Basketball Arena in Tallaght as the first of 11 National Cup finals gets under way from 6.30pm. Games will run at the arena every day until Sunday evening, with some big clashes in store this year.

In the men’s Pat Duffy National Cup final it is the fourth year in a row that the final is a Dublin derby, with last year’s cup runners-up UCD Marian hoping to cross the finish line this year when they go head-to-head with Killester. Marian were beaten on the big stage by Templeogue in the decider last year, and are hoping that this year will see the cup winging its way to the south Dublin club for the first time since 2011.

“Last year we played the occasion, not the game – that was our biggest mistake, and we’re going to try and avoid that this year,” said Marian head coach Ioannis Liapakis.

Killester will be aiming for the same having lost the 2017 cup final to Swords Thunder. They have not seen cup glory since 2010, and will be aiming to bring back silverware this weekend.

This is not the first time these sides have met in big showdowns, with Marian pipping Killester by a point from the free-throw line in the men’s Super League playoff last year to win the league title for the first time in 40 years.

They have also met twice so far this season, with Marian winning both games – most recently last Saturday night when they won by 20 points.

Meanwhile in the women’s Paudie O’Connor National Cup final the stage is set for a first-time winner as Liffey Celtics and Brunell go head-to-head on Sunday evening.

It is a first cup final appearance for Brunell after they overcame Fr Mathews in a cracking semi-final, while Liffey appeared in their first final in 2017, losing out to Glanmire. Whatever happens on Sunday a new name will be written on the cup.

Liffey Celtics go into the game as favourites as they currently are on top of the Women’s Super League table, unbeaten this season with a 10-0 record.

Brunell, who are in fifth place, come into the game off the back of a big win against DCU Mercy last weekend, and head coach Tim O’Halloran hopes the confidence from that win will carry forward into Sunday’s decider.

“We’re on a bit of a run now, the spirits are high. It’s always good to have a win going into the cup. We’ll have to put the league aside now, and hopefully create a bit of history on Sunday.”