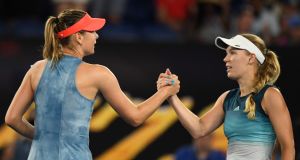 Maria Sharapova is having a hard time, bless her. Now, don’t jump to conclusions. We can’t all have a heartwarming comeback like Petra Kvitova, who literally suffered such a horrendous knife attack her hand tendons so badly sliced that she only had a 10 per cent chance of ever picking up a racket, let alone returning to a Grand Slam stage.

Damn, Petra, for winning the crowd onside during what should be the greatest comeback ever from a drug ban inflicted by the World Anti-Doping Agency (Wada) for not understanding that even great athletes have a bad heart.

But, imagine, you’re on a comeback tour, and although you’re not winning you’re certainly gaining headlines and gracing front pages for being funny yet confrontational after you dismissed a reporter for being stupid and asking dumb questions.

On top of that, imagine having all your other colleagues hate you, especially when your form is a bit hot and cold. It’s not the heart drugs. Really, Sharapova is just having her comeback.

It’s okay, though. As long as Sharapova is gracing the front pages and name-dropped in headlines, the tennis officials and powers that be will continue pushing her into our face.

Now, I get she served a ban that in my opinion wasn’t long enough. I understand that she did the crime and the time, so let’s just give Sharapova a break.

And some are fine with it. Her fans continue to adore her, sponsors continuously have her spread across main website pages next to other acclaimed stars, and we all continue to laugh along with her for having her Lance Armstrong moments and continue putting those down that dare ask too many questions. But what about that pesky Dane Wozniacki who keeps calling you out?

Genuinely, tennis has actually never been more interesting. And it all kicked off when the delicious pairing of Sharapova and Wozniacki was made. Before this match Sharapova led 6-4. But until this week she had never beaten Wozniacki at a Grand Slam, and she hadn’t beaten her on a hard court since the final at Indian Wells in 2013.

Remember when Wozniacki was demoted due to the Sharapova comeback hype train?

“Putting out a schedule where the No 5 is playing on court five, fifth match on after 11pm, I think that’s unacceptable. And when you look on centre court, I understand the business side of things completely, but someone who comes back from a drugs sentence, performance-enhancing drugs, and all of a sudden gets to play every single match on centre court, I think that’s a questionable thing to do.”

Wozniacki was incredibly annoyed with the business decisions made by US Open officials, but Sharapova always has time to bark back, stating she didn’t know where Wozniacki was while Maria herself was in round four. Nice shade to throw at the loser Wozniacki, who crashed out in round two.

Sometimes women’s tennis is a lot like sibling rivalries. Unless you’re actually making a profit on your career, you practically have to see the person you hate every time. Along with that, as my brother would say, it’s easier for your opponent to live in your head quite literally rent-free.

Even during the game you were feeling increasingly annoyed that Wozniacki couldn’t back up her good trash talk. Annoyingly Sharapova looked outrageously sharp and ready to put down her mark against a top player, just like the meldonium days. Sharapova returned each serve pretty well, was aggressive at the net and completely dominated with 37 winners against Wozniacki’s 10.

But nobody was buying that Sharapova was back. Instead she blew cold once again, losing out to hometown darling Ashleigh Barty.

And then you see the cranky and sulky Sharapova. The one that gains the headlines and reminds us why we all actually feel uneasy that the tennis officials are trying to make us get behind her when you have a genuine comeback like Petra.

Of course Sharapova knows that Sharapova sells, just like the rest of the business decision-makers in tennis. According to Forbes, Sharapova, a five-time major winner who has completed the career Grand Slam, has earned more than $280 million in her career. But doubt remains over her hot and cold performances and why she’s giving us all Lance Armstrong flashbacks with her responses to media and anyone who dares question her.

The issue now for tennis officials is how they promote her at the next Grand Slam when all eyes are on them. Surely it’s a tad bit hypocritical to demote your clean players to promote the player who served a ban.

Time will most certainly tell how this one plays out, but one thing is for sure, the women’s tennis tour is just getting warmed up regarding controversies, rivalries and good tennis.