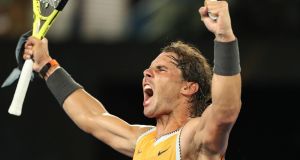 John McEnroe does not get a lot wrong. However, when he suggested a few days ago that Stefanos Tsitispas’s victory over Roger Federer might represent a changing of the guard, he momentarily forgot the championship heart and pedigree of Rafael Nadal, who will play in his fifth Australian Open final on Sunday after slaying the young Greek on a warm Melbourne evening.

Nadal, the 2009 champion, could well win his second title here, drawing him to within two majors of Federer’s 20 slams, and inviting speculation that, if he were to go on to prevail at Roland Garros (one of the safest bets in tennis), he would arrive at Wimbledon staring history in the face again. The guard is not for changing just yet.

The 32-year-old Spaniard – who retired injured in the quarter-finals last year – has arrived back in the harsh southern limelight by beating a couple of Australian underdogs in James Duckworth and Matthew Ebden, then set about their fledgling compatriot Alex de Minaur, before trouncing his old foe Tomas Berdych and, to get to Thursday’s semi-final, the ebullient ball of American energy Frances Tiafoe.

All of that occupied Nadal less than 10 and a half hours and 15 sets. He spent only an hour and 46 minutes accounting for the tired but willing challenge of Tsitsipas, the player hailed, by McEnroe and many others, as the leader of the new wave.

Nadal won 6-2, 6-4, 6-0 and has not looked as dominant at this stage of a slam since Roland Garros last year; even on his favourite surface there, he lost a set, to Diego Schwartzman. This is his first run to a slam final without dropping a set since the 2017 French Open.

Yet there were reasons to wonder. Three weeks ago, he pulled out of the Brisbane International to rest a thigh strain, a sorry continuation of his wretched run of injuries in 2018, when he played in only nine tournaments as fault lines in his hip, knee, abdomen and ankle threatened to bring his career to a painful close.

Yet here he is again, winning a semi-final on a hard court – and persuading McEnroe, in his role as courtside jester, to now praise him as the nemesis of the Next Gen pretenders.

“They don’t need any message,” Nadal said. “They are good, improving every month. It is always a big challenge to play against them. There is a new and very good generation coming. They are here now.”

He said of Tsitsipas, who has had a remarkable tournament: “He’s brave, goes to the net often. He has everything to be a multi-grand slam champion. I hope to play him again in the next couple of years.”

He added: “A few weeks ago in Brisbane, talking to the tournament director there, I had to take a very tough decision. It was difficult to imagine then that I would be where I am now. I feel really, really well.”

Tsitsipas, who had taken 15 hours and 31 minutes to reach his first slam semi-final, signalled his intentions early, serve-volleying with brio. But Nadal struck first when he forced an uncontrolled backhand from Tsitsipas that lobbed in the tramlines. He broke again then ground out the points to take the set in half an hour.

Tsitsipas, having taken care of business brilliantly against Federer, was discovering that backing up against the player who may go on to secure as many slams as the Swiss genius, was no straightforward exercise.

The 20-year-old Greek tennis classicist with the flowing locks and the single-handed backhand was shattered but philosophical later.

“I have no idea what I can take from that match,” he said. “It’s not that I was even close to getting to something. I only got six games. I feel very strange. I feel happy with my performance in this tournament but, at the same time, I feel disappointed. It’s a very weird feeling. It’s annoying that I didn’t get close to breaking him. He’s very aggressive from the baseline.

“It felt like a different dimension of tennis. He gives you no rhythm. He plays just a different game style than the rest of the players. He has this talent that no other player has. I’ve never seen a player have this. He makes you play bad.”

Awaiting Nadal will be either Novak Djokovic, whom he has beaten 25 times in 52 matches, or Lucas Pouille, who has won one of their three encounters. Djokovic and Pouille meet in the second semi-final on Friday.

Djokovic, the world No 1 still unless Nadal wins on Sunday, knows better than most that this first major of the season can change careers. He said after Kei Nishikori quit injured in their quarter-final: “This was my first grand slam trophy back when I was 20 years old, and that opened a lot of doors for me. That was a huge confidence boost, a springboard for the rest of my career.”

He said of Pouille: “It’s his first semi-final at a slam but he has won against Nadal in New York some years ago, and he’s made a couple of advances at the big tournaments. He’s not afraid to play his best at the biggest stage in sports. I expect him to come out, be very confident – as he always is.”