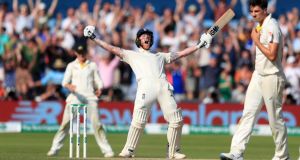 Ben Stokes celebrates after his 135 not out steered England to a one wicket win over Australia at Headingley. Photograph: Mike Egerton/PA

Headingley 1981 was a foregone conclusion compared with this. So, too, the World Cup final in July, as Ian Botham’s incredible exploits of 38 years ago have been matched, maybe surpassed. But on a day like this who cares about rankings anyway? Ben Stokes produced the innings of a lifetime to snatch a one-wicket victory, which keeps the Ashes alive and the game alive, while threatening to cause multiple heart failures among those lucky enough to witness this contest.

A few figures: England, bowled out for 67 in the first innings, achieved their highest ever winning total by scoring 362 for nine at this unlikely theatre of dreams on the other side of the Pennines from Old Trafford. The last-wicket partnership – somehow unbroken – between Jack Leach and Stokes was worth 76. Stokes finished, most definitely unbeaten, on 135, which included eight sixes; he had 61 when Leach made his way to the crease.

But beyond the figures was astounding melodrama and we have to start near the end. It defied belief that England had reached 351 for nine when the Australia captain, Tim Paine – who, like his counterpart Kim Hughes all those years ago, had every reason to believe that this match had already been decided – tossed the ball to Nathan Lyon. Stokes was on strike with eight runs needed for victory. He cut the first two deliveries to distant fielders and declined to run, following the pattern of what was already a stunning partnership.

The third ball from Lyon was fuller and Stokes swung. He did not quite time it perfectly but he does not have to. At long-off Marnus Labuschagne circled; at the bowler’s end Lyon squinted towards the boundary, urging the ball to stay in play. By a metre or so it cleared the rope. For the first time in the match England were rock- solid favourites to win. One run would be sufficient for a tie, two for victory.

Now the field came in. This must have felt claustrophobic for Stokes. For the previous hour the vast majority of the fielders had been stationed on the boundary when he was on strike. The next ball was cut by Stokes straight to one of the fielders now close enough to save the single. No matter; there were two deliveries left and after his recent pyrotechnics surely Stokes would now deliver the final blow.

Lyon fired in the next delivery and Stokes cut again. Leach started scrambling a run; Stokes sent him back but it was clear as the throw from Pat Cummins headed towards Lyon that England’s valiant No 11 would be stranded. Home hearts sank until Lyon fumbled the ball, and the images of Australia’s 1999 World Cup semi-final against South Africa flashed past.

One ball remained and Stokes decided to explore the legside this time. He slog-swept but missed. Lyon’s appeal was prolonged, suggesting an odd mix of desperation and confidence. Umpire Joel Wilson’s finger failed to appear but the realisation that the Australians were unable to ask for a review did come to light. They had wasted their last review against Leach in the previous over from Cummins (incidentally the solitary area in which England have been consistently superior in this series is in their use of DRS). The subsequent replay demonstrated that Stokes would have been out if it had been possible to review the decision.

After that it was relatively plain sailing. Unusually, Leach was left on strike as Cummins ran in at the start of the next over. He ducked the first ball, defended the second and the third saw the ball trickle from his bat on the legside. Leach’s first run in the partnership had levelled the scores. In came Cummins again; Stokes crashed the ball to the cover boundary and the most amazing Test match of all was over.

There were one or two dramas before those final 10 deliveries. Even the first four overs of the day, which were all maidens, somehow added to the tension. The first single by Root was cheered to the skies and then England’s captain departed, superbly caught by David Warner off the inside edge and pad off the bowling of Lyon as he advanced down the pitch.

Paine took the new ball as soon as it became available. It seemed the obvious thing to do yet it led to a sudden acceleration in the run rate. Jonny Bairstow was in skittish mood and two consecutive drives off Josh Hazlewood reached the offside boundary. Gradually, after hours of abstinence, Stokes began to find the odd boundary. The 50 partnership was posted inside 10 overs and as if in celebration Stokes lifted a legside delivery from Cummins into the stands.

At lunch England, on 238 for four, might have been favourites, though this realisation did not seem to do them much good. They proceeded to lose five wickets for 48 runs after the interval with only Stokes looking in control – except on a few occasions when he was contemplating what constituted a run.

Bairstow was caught in the slips for a very handy 36 then Jos Buttler was probably a victim of poor calling from Stokes. He was sent back too late as Travis Head hit the stumps, so there could be no reprieve of their World Cup final partnership. Chris Woakes, mindful that a bouncer barrage was on its way, was lodged on the back foot when driving at a rare full ball and was caught at mid-off. Jofra Archer swished three boundaries but was then well caught in the deep by Head and Stuart Broad was palpably lbw to his second delivery. 283 for nine. Ah well. It had been a good game.

Now Leach, with his unassuming West Country gait, walked out to join Stokes with 73 runs needed for victory. Perhaps one or two despondent punters opted to beat the traffic at this point. Now Stokes switched from Denly mode to d’Artagnan. The fielders were spread far and wide but still he hit Lyon for two consecutive sixes, the second of which was the most preposterous switch-hit into the Western Terrace.

He flicked a short ball from Cummins over his left shoulder for another brilliantly improvised six. Upon reaching his 100, the best of his career (he will have to live with that knowledge now – and it was far better than his 258 in Cape Town), he did not celebrate. That was not his goal.

Next Stokes took 17 runs from a Hazlewood over, pull shots, drives and legside flicks, which magically just managed to keep finding or clearing the boundary. A half-chance flew to Marcus Harris at third man but he could not quite cling on as he dived forward. This was beyond Roy of the Rovers.

Meanwhile Leach ostensibly remained calm, despite the fact that his glasses kept steaming up. Hardly surprising.

Amid the jubilation Leach could ponder that he had now won two matches for England with the bat in the surreal summer of 2019: 92 against Ireland, one not out against Australia. With due respect to Tim Murtagh and co, we all know which innings he will cherish the most. – Guardian