England ready to pounce on Ashes absence of Steve Smith 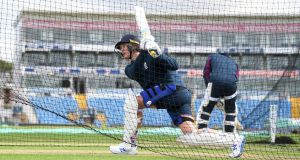 Jason Roy of England bats during a nets session at Headingley ahead of the third Ashes Test. Photo: Gareth Copley/Getty Images

Joe Root believes England are ready to pounce on the absence of Steve Smith and heap more pressure on Australia using the fast bowler who was born for the big stage.

Jofra Archer remains the name on everybody’s lips after sending down the searing 92mph short ball that struck Smith’s neck at Lord’s.

The tourists have lost their talisman to delayed concussion for the vital third Test starting on Thursday at Headingley.

While England’s predicament looks precarious – the 1-0 deficit with three to play means they cannot afford any slip – Root is sensing a major chance in the first Ashes fixture in a decade at his home ground.

On Smith, who was dominating the series with 378 runs from three innings, England captain Root said: “They will be huge shoes to fill. It’s very unfortunate on their part but we had the challenge with Jimmy Anderson going down injured in the first Test and had to manage without a replacement.

“You get these swings within a big series like this and when you get your opportunity you’ve got to jump on it. It is a huge hole. He is a big focal point of their team and we have got to try to capitalise.

“I feel we are in a really good position in the series to square it up, then put a lot of pressure on Australia. I’m fully confident we can do that. I expect us to go up a level in this match.”

Asked about Archer was coping with the attention, Root replied: “He’s one of those guys who seems to be born for these occasions. Once you’ve got a super over in a World Cup final in your back pocket, it makes everything a bit easier.”

The high-velocity debut from Archer, when batsmen were struck on the head or body 11 times, has certainly got them thinking and after seeing Smith’s blow a number of players on both sides are now expected to attach the optional neck protectors to their helmets.

Jason Roy was struck on his protector in the nets on Tuesday and while he has passed all concussion tests since and is down to play, Surrey’s Ollie Pope – fresh from a double-century against Hampshire – will be on standby in Leeds just in case.

Roy will undergo a final checkup on Thursday morning but were he to be named in the XI and then report delayed symptoms mid-match, a concussion substitute like the one afforded to Smith would not be allowed.

Root reflected how blows such as Smith’s might affect a batsman, saying: “The thing that hurts the most is your ego. You’re stood out there in front of 35,000 people and some has mugged you off a bit – that’s how it feels when I’ve been hit.

“You pride yourself on being able to either get out of the way or take it on and you make sure, first and foremost, you stay in and keep batting. I’ve never had a blow as serious as that, so it’s hard to comment on Steve’s case. But you could see the concern on the guys out in the field.”

Provided Roy is passed fit, Root is expected to name an unchanged side even if he was coy on the eve of the Test.

Sam Curran does offer a left-arm angle and potential swing but the captain leaned towards the under-bowled Chris Woakes when saying: “He certainly has the ability to exploit the conditions.”

Overall, Root said he expects the bowlers to dovetail Archer’s thunderous approach from the other end. Stuart Broad, the newcomer’s senior by 128 caps, was described as “enjoying the fact Jofra is getting quite a lot of the headlines” despite the fact Broad has 10 wickets.

Marnus Labuschagne, Smith’s concussion replacement at Lord’s, is likely to be one of two changes for Australia, with Peter Siddle down for a rest and James Pattinson the favourite to come off the bench ahead of Mitchell Starc.

Labuschagne was struck on the grille by Archer but the Australia captain, Tim Paine, while calling the 24-year-old’s impact as great for Test cricket, also looked to attribute his side’s struggles to the pitch. All eyes then on a strip that looked to have a decent covering of grass 24 hours before the toss.

On how the two batsmen knocked down by Archer will respond, Paine said: “Steve loves batting, I don’t think that’s going to change. Marnus is strange, he seems to enjoy getting hit on the head, so he’s a different kettle of fish altogether.

“Steve Smith’s the best player in the world. He will come back in the next Test – or the tour game against Derbyshire [next week]– and we’re expecting him to be the same old Steve Smith. He’ll adapt as he always has.” – Guardian