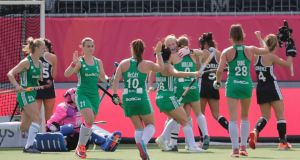 Ireland celebrate a goal against Germany earlier in the EuroHockey Championships, in which they finished fifth. Photograph: Olivier Hoslet/EPA

Katie Mullan dug out a scrappy winner to secure Ireland’s third win of the EuroHockey Championships week, their 3-2 result enough to secure fifth and their equal highest finish in the event.

On a sleepy morning at a hungover Wilrijkse stadium - bearing all the scars of the Belgian men’s celebrations from the night before - the Green Army’s performance matched the occasion.

Shirley McCay said they could hear the Red Lions celebrations until at their nearby hotel deep into the night, doing little to improve the mood for a 5.15am alarm call for a 9am tip-off.

Russia took advantage, Bogdana Sadovaia dragged into the bottom corner for 1-0 at half-time. Ireland switched to a more direct, less passive second half approach, and it paid dividends.

Zoe Wilson’s lengthy bash found Nikki Evans clean through one on one and her slap dropped in off a defender’s body on the line. Sarah Hawkshaw created a 2-1 lead with something of a miscontrol sending the Viktoriia Aleksandrina the wrong way and she poked home.

Aleksandra Leonova equalised from a corner rebound before Mullan pounced on the winner, a suitably scrappy one, with less than two minutes to go.

The skipper said she was “somewhat proud” of her team as they bounced back from the heartache of missing the semi-finals by a single goal to win against both Belgium and Russia with gutsy late winners.

It saw Ireland end the series with three wins, one draw and one defeat, likely to be enough to retain their place at eighth in the world.

With it, it pretty much rubber stamps a home draw in the Olympic qualifiers with China, Korea, Chile or USA the opposition which Mullan says is now the focus.

“Grinding it out and the team spirit we showed two days ago and today is something we have to bottle up and take with us through to October.

“We have it in the bank. We’ll take a couple of days rest and then hit the ground running for eight weeks of really tough preparation. We are under no illusions it will be a tough qualifier but we will be more than prepared.”

For new coach Sean Dancer, it has been a solid baptism into the role. He knows there is plenty of work to be done, pin-pointing the attacking and defensive circles as the two key zones to tighten up.

He is keen for the forwards to back themselves further rather than seeking the pass in the kill-zone while some additional toughness in front of the pads is another area of focus.

But the mood is upbeat and confident ahead of those dates, especially if a sizeable home support is in place.

And McCay - who could play in her 300th match in those qualifiers - feels the side is performing to a higher level than last year’s World Cup.

“Better, I think,” she said when asked to compare. “We’ve a real drive both in attack and defence, not that we didn’t have that last summer but I think we probably rode our luck last summer but at this tournament.

“We created our own performances and our own victories and, I think, on another day, we could have been getting draws and wins out of those games and maybe getting to a semi-final.

“The future of this team is bright and it’s something we want to take forward.”