Australian Open: The American will next play Canadian Eugenie Bouchard 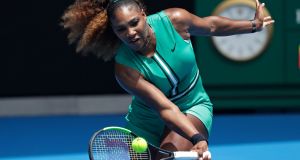 Serena Williams hits a forehand return to Germany’s Tatjana Maria during their first round match at the Australian Open. Photograph: AP

Serena Williams made a ruthless start to her quest for a record-equalling 24th Grand Slam singles title with a 6-0 6-2 victory over unseeded German Tatjana Maria in the first round of the Australian Open on Tuesday.

Playing her first Grand Slam since her infamous rant against the umpire at last year’s US Open final, the 37-year-old Williams seemed to have decided to move on from last September’s incident that caused a furore across the world.

She was handed a warning by chair umpire Carlos Ramos for a on-court coaching violation before being deducted a point for smashing her racquet and later a game for a heated argument during her loss to Naomi Osaka.

Her coach Patrick Mouratoglou told reporters last week he expects on-court coaching to continue virtually unchecked at the Grand Slams despite the hue and cry over the issue.

But Williams refused to be drawn in.

“I, like, literally have no comment,” Williams, wearing a black T-shirt with the message ‘Until We All Win’ at her post-match news conference, said.

The seven-time Australian Open champion was eight weeks pregnant when she won the last of her 23 Grand Slam titles at Melbourne Park and returned to tennis last year after the birth of her daughter in September, 2017.

She has kept a low profile in Melbourne and did not appear before the media before the start of the tournament but was enthusiastic to talk about topics more softer, like how her daughter’s black doll was named Qai Qai.

“Spending a lot of time with my daughter. I think that’s the priority for me. And I feel like literally every moment I get I practise, and then I go home,” she said.

“It’s kind of what I do in Florida. I train and I go right home and I spend the rest of the day with my daughter. For now, as a working mom, I feel guilty. And I understand that that’s normal, but - and these are years I’ll never get back.

“I just try to spend every moment that I can when I’m not working with her. And for me that’s super important.”

Williams showed on Tuesday she has lost none of her brutal power and athleticism in the match between the two mothers at Rod Laver Arena.

She peppered the court with her heavy groundstrokes and also advanced to the net whenever she had an opportunity, losing only 24 points against Maria and she concentrated on being consistent and cutting down on unforced errors.

“It was nice to be back out there. Last time I was out there was a great moment, especially internally for me, it was even a better moment,” she added. “I think it was a good match today.”

Williams finished the match in just 49 minutes on her second match point when Maria, who is also her neighbour, sent a backhand wide and the American will next play Canadian Eugenie Bouchard, who beat Peng Shuai of China 6-2 6-1.

“It will be a great match. She plays really well,” Williams said of Bouchard, who reached the Australian Open and French semi-finals and the Wimbledon final in 2014.

“She does everything well, and I really like that she doesn’t quit,” Williams said.

“You know, people write her off, and she doesn’t let that bother her. She continues to fight and do what she needs to do. I think that’s really not good.”

1 The Offload: Ireland are stuck in no man’s land
2 Here is your handy guide to sport on television this week
3 How a visit from his barber helped Kyle Sinckler get back to his best
4 Munster beat Glasgow to keep their winning streak going
5 Mickey Harte is the new Louth football manager
Real news has value SUBSCRIBE