Roger Federer into 20th consecutive third round in Melbourne 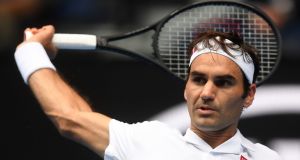 Roger Federer of Switzerland in action against Daniel Evans in Melbourne. Photograph: EPA

Dan Evans will surely never play at such an excellent level as this for so long on a major stage, and lose – except, probably, if the opponent is Roger Federer again.

On day three of the Australian Open, Evans pushed the defending champion to the limits of his genius – reminiscent of his fine losing effort against Stan Wawrinka in the third round of the 2016 US Open – before Federer got it done in just over two and a half hours, 7-6 (7-5), 7-6 (7-3), 6-3.

The winner said courtside, “I couldn’t pull away early in the match, which was to his credit. I thought I played well. The margins are slim if you don’t win those close points.”

In reference to the similarities in their method and tennis philosophy, from the one-handed backhands to the sliced returns, as well as their willingness to attack at ever opportunity, Federer added, “My thoughts going in was that I was playing myself, potentially. I had maybe a little more size.”

If it were boxing, this second-round contest would have been lauded as perfect match-making between the intuitive shotmaker from Solihull – responding to Brummie-tinged calls of, “Come on, Peaky” – and the ageless Swiss, who is hunting down his 100th tournament victory.

Evans still hasn’t taken a set off Federer in three matches, but, in front of a full house in the Rod Laver Arena, he came desperately close.

In the first set, he gave an excellent account of himself, with minor distractions. He overcame a minor hiccup at 30-all on his serve in the eighth game, when a Federer forehand seemed to drift long but was not called; as he had been in mid-shot, there was no review. But Evans held, pumping his fist, clearly happy to be trading on level terms with the owner of 20 majors, seven of them here, and four of those since he turned 30.

The disparity in court intelligence was not blindingly apparent, as the Birmingham player went at Federer with his full bag of tricks, chipping and slicing with precision. The Swiss answered him in kind, only with more practised ease.

Federer, serving at 40-15 in the ninth game, paused as the rain spat, resuming after five minutes to hold. Evans came from 15-30 on his serve to stay in the set, still looking comfortable at this level. An appalling late call on Evans’s overcooked forehand in the 12th game gave Federer set point, but Evans conjured a wonderful fightback to force the tie-break.

Trusting his attacking instincts, he was two points from taking the set, when he raced in too eagerly behind his serve, dumping a difficult volley from near his toes, then shoved another on the run into the tramlines to hand Federer two set points. Evans’s final backhand inched long, and, after an hour of superb tennis, Federer was mightily relieved.

While Federer remained his calm self, Evans faltered, broken at the start of the first set. He pushed him to break point in the next game with a string of wonderful shots, but could not quite crack the Swiss vault.

When Evans gestured to the umpire that he’d felt another drop of rain, they paused, but the roof remained open. “It’s all right, I’ll be the one running,” he shouted to Federer, who smiled at the suggestion that the danger on a slippery court would belong to Evans, while he serenely directed traffic from the other end.

He did – but not all the time. Evans saved two set points for 4-5, blitzed a backhand past his devil-may-care opponent to break back, Federer held and his serve was too strong in the second shootout.

Not many expected Evans to create a British fixtures clash, though, and he was still giving Federer quality grief after two-and-a-quarter hours as Leicester’s Katie Boulter was beginning her second-round match against the formidable Russian Aryna Sabalenka on Melbourne Arena.

While Evans’s noble resistance began to crumble under the sustained pressure of Federer’s searching groundstrokes and solid serve in the third set, he fought hard all the way to the end. And he clearly was enjoying the experience, smiling to his box when a favourite piece of music flooded the arena during one changeover break.

From 1-4 down, Evans clawed his way back to 2-5, held and forced Federer to serve it out, which he did to love, finishing with a flourish, a delightful backhand down the line.