Angling Notes: ‘A few fish jumping, but that was it’

As each year passes, the first salmon of the season appears to be getting later and later 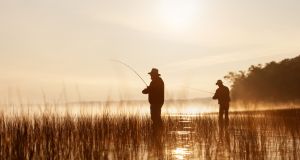 At time of writing, we still await the first salmon of the new season. On the River Drowes, fisheries owner Shane Gallagher said the good turnout of anglers and the splendid weather conditions on opening day last Tuesday, failed to produce the first silver bar of 2019.

“Anglers reported a few fish jumping, but that was it”, he said.

As each year passes, the time span from opening day appears to be getting later and later. Last year, 30 days passed before Drowes fisheries manager, Bill Likely from Kinlough, Co Leitrim, caught the first fish.

Of course, his long wait was more than justified. The sea liced 3.4kg (7.5lb) fish was taken on a Black and Gold Rapala lure and landed shortly before 1pm. “I have fished the Drowes for over 30 years and this is my first time to catch the first salmon of the year in Ireland,” he said.

The previous year, the honour of the first Atlantic salmon went to Ronan O’Connor on opening day (Feb. 1st) on the Careysville Fishery of the Munster River Blackwater. In 2016, Neil O’Shea was the lucky captor on Lough Currane in Waterville on January 17th with a fresh fish of 10lb.

Clonbur in Co Galway came to a standstill last week for the funeral mass of the late Colm Burke. Thousands of mourners gathered in the picturesque village over the two days from all corners of Ireland and further afield to pay their respects to Colm who leaves behind his beloved wife Paula and four young children. The angling fraternity was also well represented and support from the local community was immense.

Colm, the community man. Colm was immersed in Clonbur. He was chairperson of the community council and only recently sent out messages about the walk last Sunday for funding for the Galway Hospice.

And it was through the hospice, he was able to have his last while in his own home. His messages for last Sunday raised more than €5,500. As a top-class carpenter, he also found time to “help out” in the Zambia Building Project, an achievement he was so rightly proud of.

My sincere sympathy goes out to Colm’s wife Paula, his children Saoirse, Eoin, Orla and Quinn and his extended family. Ar dheis Dé a raibh anam.

A most enjoyable get-together during the festive season at Annamoe Trout Fisheries in Co Wicklow proved the ideal tonic for a group of hardy anglers. Basking in near summer temperatures, conditions were ideal, yet the fish were somewhat hesitant. Those with the blood worm on a floater scored best.

The annual general meeting of Lough Lene Angling Association will take place this Friday (Jan 11th) in Collinstown Hall, Co Westmeath, at 8.30pm. All members are invited to attend.