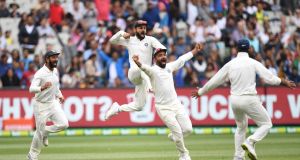 India needed just 27 balls to wrap up their first Test win in Melbourne since 1981.

The tourists were on the cusp of victory after the fourth day at the MCG but Pat Cummins provided stubborn resistance as Australia had two wickets in hand.

They were chasing an unlikely target of 399 but were helped when rain began to fall in Victoria on Sunday morning.

After an early lunch, Cummins resumed on 63 and Nathan Lyon on seven, needing to see through 71 overs to draw the Test, or score 141 runs to chalk up an unlikely victory.

Jasprit Bumrah and Ishant Sharma were on bowling duties and had a maiden and wicket each.

The key wicket of Cummins came off the bowling of Bumrah, the Australian edging to Cheteshwar Pujara at first slip without adding to his overnight score.

Seven balls later and Australia’s fate was confirmed as Lyon tried a pull off Sharma and was caught behind for seven as India won by 137 runs after the home side fell to 261 all out.

The win means India retain the Border-Gavaskar Trophy ahead of the final Test in Sydney in the New Year.