Joanne O’Riordan: Unifying power of sport not to be underestimated 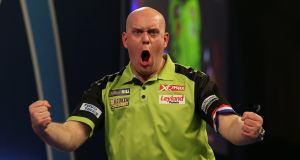 I haven’t even overcome the first week in January, and already my inbox is flooded with “be your best self”, “19 ways to become a better you” and “be the change you wish to see in the world”.

For those of you who have heard me speak at events, you know they are the taglines and annoying mantras I blurt out during speeches.

But behind it all, my Christmas and New Year period is dedicated to sitting down, ripping into a box of Heroes and indulging in a sport which glorifies drunken behaviour, whose poster boys are overweight, tattooed and sweaty men and basically one which has relied on gambling sponsorship and Eddie Hearn to turn into the extravaganza it is today.

That’s right, I sit down with my family, yell 180 and attempt outrageous maths while watching the darts.

My dad was always a keen darts fan and player, so from a young age we were glued to Sky Sports as Peter Manley walked two pretty girls down a tavern to Amarillo, as the Cowboy Bob Anderson did the dad-like finger guns after nailing a double or as Dennis the Menace Priestley wore a ridiculous leather jacket that, if I’m honest, can’t really be justified.

Every year, the whole family go into our version of the Ally Pally, or as it’s more commonly known as, our sitting room, to endure whatever feast the darts has to serve up.

The general schedule of events is as follows: mother complains relentlessly about her children bringing their dinner into her well-preserved sitting room, eventually gives up and takes her plate with her; sibling gets annoyed their spot is taken and has to sit in the dreaded corner chair; another sibling complains about having to eat off their lap.

I usually make an ill-timed joke about having my own seat and tray; darts kicks off; father gets so excited he usually passes out by the second set. Circle of life and all that.

Somewhere in the middle of that you have the Hearn clan swanning their way in and announcing for the millionth time how they have saved darts, Wayne Mardle exclaiming this has definitely been the greatest year for darts ever, drunken rowdy fans tossing up between Kolo/Yaya chants or that awful Don’t Take Me Home song. But the one man who always rises above it all and just takes it in his stride is the wonderful Dave Clarke just being his legendary self. That man is someone who lives every single precious moment of his life, irrespective of the day or month or year.

We have had our ups and downs with the darting world. Of course, my friends mock me relentlessly about how darts isn’t a sport and I’m an idiot for getting sucked in, or my dad will fall out of love with the game after his beloved Phil Taylor semi spun out of control and became a bit of a darting villain. You either die a hero or live long enough to see yourself become a villain, I suppose.

The great final of 2007 is an unspoken topic in my house after my father channelled his inner Theresa May with Sky customer service. The result was no Sky for that final and my dad hanging off the satellite dish trying to pick up a signal from the good Lord above . . . hey, we were desperate, we would have taken that stream from a Russian satellite if we thought the darts was on it.

As an aside to Theresa May, chances are the big bullies will win, my father had to make amends with Sky and walk away after eating humble pie with his tail between his legs.

But isn’t that what Christmas is all about (minus fighting capitalism and big corporations)?

I’ve read all the articles and nodded in agreement at the review of 2018 which tells us that sport is not just about balls, rules, points and sets.

Sport is obviously a reflection of society, human nature, an expression of our humanity, but it still stands that sport can be a way of uniting those that would never be united in any social sphere.

If our crazy and chaotic family can come together and all sit in slight harmony for four hours of a darting extravaganza, then the role in sports in our society can become even more significant in 2019.

And in good old-fashioned new year column spirit, that is probably the energy you should take into 2019.

You don’t need fancy speakers shouting at you about corporate emotions and empathy, instead take a leaf out of our family’s book, sit down, watch the darts, cheer together, brag but not in a braggy manner, but more importantly, realise that we are all in this together, experiencing this weird rollercoaster.

And, as my mother would say, if all else fails, get a beer belly, grow a beard, get some tattoos and throw a few darts.