Andy Murray pushed himself to the outer limits of his endurance

Andy Murray may retire after the Australian Open, with the severe pain from his troublesome right hip having become almost unbearable for him to play on, the former world number one said on Friday (January 11). 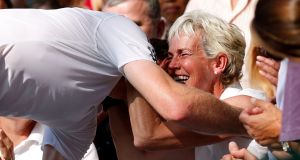 Andy Murray celebrates with his mother Judy after winning in Wimbledon in 2013. Photograph: PA

It is a poignant oddity that Andy Murray’s tennis career is ending as it began: in pain, struggle and confusion. When the thin, hairy teenager from Dunblane joined the full Tour in 2005 as the reigning 2004 US Open boys champion, he was No 407 in the world, but spent the first three months coping with a back injury that had cut him down in South Africa because, as he described it at the time, “I was growing a lot”.

And how he grew. On the eve of what might well be his last match, four months shy of his 32nd birthday after tumbling to 230 in the rankings, Murray can look back on a career littered with gold and cruelly bloodied by the slings and arrows of life.

His right hip, never reliable, has finally given up on him. His spirit is drained too. He is tired, finally, of the struggle. He survived back surgery towards the end of 2013 but, a year on from having his aching hip patched up by a Melbourne surgeon to help him eke out a few more moments in the sun, there is nothing left to give, nowhere else to go. To see him reveal on Friday that he could barely put on his shoes and socks without wincing was to witness a warrior laying down his shield.

I watched that boys’ final at Flushing Meadows 15 years ago. Murray, under-powered but immensely gifted, was as passionate and determined on the court in beating the cerebral Russian Sergiy Stakhovsky as he was introverted away from it. It would be eight years before he returned to New York to win his first major, by which time he had acquired the bearing of a feared and confident champion, a fully grown man who knew his own worth.

They were one and the same, of course. The essential Murray has not changed. There is a palpable decency about him, which several of his many friends mentioned when they learned of his impending farewell on Friday.

He was and remains the owner of a particularly Scottish sense of humour – not as theatrical as, say, Billy Connolly, nor as earthy as Rab C Nesbitt. Maybe somewhere in between. He delighted in the engineered misfortune of his team members, all of whom have remained fiercely loyal to him – and not just because he was paying the cheques. Their respect for him as an athlete was deep, as it was among his peers.

Dan Evans and Murray didn’t always see eye to eye but there was warmth there too, especially as Davis Cup teammates. “It’s desperately sad that his career’s had to end because of injury and not so much on his own terms,” Evans said after qualifying for the Australian Open on Friday. “But he’s had an unbelievable career, and he’s probably one of the best sportsmen Britain’s ever had, if not the best.”

Kyle Edmund, who first met him when he was 14 and treasured invites to Murray’s Miami winter training camps, agreed. “He’s been my biggest role model. He’s Britain’s greatest tennis player ever, and you could say maybe Britain’s best sportsman ever.”

Athletes don’t always enjoy talking about other athletes. It can be a self-centred existence. But the compliments flowed like honey.

“Just to see his dreams come true and give hope to others and inspire myself as well as many others is just astonishing,” young Katie Boulter said. “When I cracked the top-100 he messaged me and was very sweet and supportive. I think he’s been that for a lot of people, and every single person I know appreciates that.”

Murray touched people in different ways. Heather Watson, who was a little miffed he chose to play Olympic mixed doubles with Laura Robson in London in 2012 rather than with her, recalls, “When he won Wimbledon for the first time, I was watching it in San Diego. When he started crying, I just started bawling my eyes out.”

Johanna Konta put it succinctly: “He maximised everything that he has, to bring the best out of himself. Not many people can say that. That’s something, as an athlete, to look up to. It makes me quite emotional, because that’s a beautiful thing.”

It didn’t always look beautiful. Murray lacked the smooth grace of Roger Federer (who doesn’t?). Novak Djokovic was more startlingly elastic a retriever of impossible “gets”, perhaps. Stan Wawrinka had more raw power, and Rafael Nadal could out-hustle him (as well as everyone else). But none of them had a bigger heart than the Scot.

What most of us will remember about him on court was his extraordinary will to overcome, to repeatedly, perversely rise from the depths, leaving his opponent bewildered. The look on Djokovic’s face as Murray, close to cracking in the third set before steadying his nerves to serve out for victory in their 2013 Wimbledon final, was one of a man who’d had his pants pulled down in public.

Murray could be maddening too. As he chased down the angels, his temper shortened. He sulked on a planet of his own. He had as fruity a vocabulary as any Glaswegian docker. But it was all genuine. In the many years I have been privileged to chronicle his deeds, I can’t remember him telling a lie. Perhaps in retirement he will set me straight.

Above all, Murray should be remembered for what he did best: to drain the last drop of his talent in pursuit of victory. So completely did he use his reserves in the concluding months of the 2016 season to unseat the faltering Djokovic at the top of the rankings that his body screamed for him to cease. On July 10th, he won his second Wimbledon – and went out drinking with (among others) a few of the tennis writers he had previously kept at a respectable distance. He rates that day as among his favourite experiences.

However, when the fun stopped, he got down to business and pushed himself to the outer limits of his physical and mental endurance. He won match after match, tournament upon tournament. He was irresistible. As Djokovic fell to pieces, Murray got to the top of the mountain and briefly stayed there, but the descent was inevitable once the adrenalin faded. His body began to give up on him and, from then until now, his has been a familiar fight against the odds.

There will be no more gambling, though. On Monday, he expects to lose against Roberto Bautista Agut in the first round of the tournament he has entered 13 times now, reaching the final five times, and losing each one – to Djokovic on four occasions, and once against Federer. He will strain every muscle to prove himself wrong one last time. The Spaniard, a decent man, will not have a friend in the house.