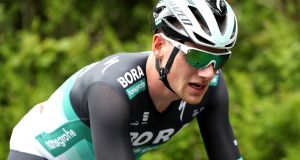 Sam Bennett: the Bora-hansgrohe rider will begin his 2019 season in the Vuelta a San Juan Internacional on January 27th. Photograph: Bryan Keane/Inpho

With the peloton gearing up for the start of the international season, Ryan Mullen will get his racing year under way in the Down Under Classic, which begins on Sunday. He and his Trek-Segafredo team will then line out in the Santos Tour Down Under WorldTour event two days later.

Mullen’s main objective in the latter event will be to help team leader Richie Porte, but building his own form and taking advantage of any personal opportunities which may arise will also be important. He is in year two of his contract with Trek-Segafredo, and it is important that he makes progress, particularly in the time trials and Classic races.

Fellow Irish pro Sam Bennett has ridden the Australian races for the past two seasons, but will miss them this time around. Instead, the Bora-hansgrohe rider will begin his 2019 season in the Vuelta a San Juan Internacional on January 27th. He had a superb 2018, winning three stages in the Giro d’Italia and ending the year with three stages plus the points classification in the Presidential Tour of Turkey. Since then he has logged a strong winter and is optimistic about the season ahead.

While Bennett will aim for stage success in the San Juan race, March’s Paris-Nice will be a bigger target for him. He won a stage there in 2017, his first WorldTour success.

Bennett is frustrated by indications from his team that it will not select him for the Giro d’Italia; despite his strong showing last year the German squad is favouring young German competitor Pascal Ackermann, almost certainly due to his nationality.

Because of that Bennett will seek to prove a point by winning as often as possible this season. He has two motivations in doing so; success would force the team to give his ambitions greater consideration or, alternatively, ensure a better contract with another squad.

Meanwhile, Irish stage race specialist Dan Martin will begin his own season in the Challenge Mallorca races at the end of this month. After that he will participate in the new UAE Tour, a merger between the Abu Dhabi Tour and the Dubai Tour, which starts on February 25th.

Martin’s key objective for the first part of his season will likely be the subsequent Volta a Catalunya, which he won in 2013. This will in turn set him up for the Ardennes Classics. He has shone there in the past, and the Flèche Wallonne, Liège-Bastogne-Liège and the Amstel Gold Race will be amongst his most important goals of the season.

At home the Irish cyclocross championships will take place this weekend at the Fota House and Gardens in Co Cork.