Ruthless India and Pujara grind Australia down in Sydney 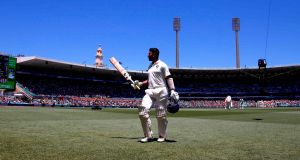 India’s Cheteshwar Pujara leaves the field at the SCG after being dismissed for a mammoth 193. Photograph: David Gray/AFP/Getty

India moved closer to a first Test series victory in Australia after compiling a huge 622 for seven declared in their first innings at the Sydney Cricket Ground.

Cheteshwar Pujara and Rishabh Pant piled on the pressure on day two of the fourth Test, in which India only need to avoid defeat to claim a series victory.

Opener Mayank Agarwal set the tone by scoring 77 before falling to Nathan Lyon, but the real damage was done by the middle order.

Pujara eventually went for 193 after facing 373 balls, a total including 22 fours, before being caught and bowled by Lyon.

Pant continued the momentum by blasting 159 off 189 balls — his best Test score - and was ably supported by 81 from all-rounder Ravindra Jadeja.

With the fall of Jadeja — who hit Pat Cummins for four fours in one over — India declared to leave Australia with 10 overs to face before the close of play.

Openers Marcus Harris and Usman Khawaja ensured the hosts ended the day without loss, reaching 24, but they face a huge task to win the Test and avoid a historic series defeat.