Andy Murray content if Melbourne exit was his last match 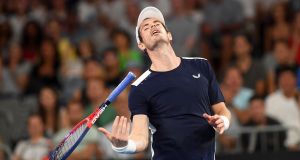 Andy Murray reacts during his first round match against Roberto Bautista Agut at the Australian in Melbourne. Photo: Julian Smith/EPA

Andy Murray’s hopes of finishing his tennis career at Wimbledon this summer seem negligible, and he says there are “no guarantees” further surgery on his damaged right hip would enable him to carry on playing, even after losing heroically in five sets on the opening day of the 2019 Australian Open.

Murray, who turns 32 in May and has reached five finals here, said later: “I’ll probably decide in the next week or so. If I go ahead with the operation and I don’t recover well from it, then I don’t play again. I’m aware of that. I’ll be in less pain doing just normal things, like walking around and putting my shoes and socks on.

“I know that I’m not the same player as I was. But, if today was my last match, it was a brilliant way to finish. That’s something that I’ll probably take into consideration, as well. It was an amazing atmosphere. I literally gave everything that I had on the court, fought as best as I could, and performed a lot better than I should have done with the amount I’ve been able to practice and train. I’d be okay with that being my last match.”

He added: “I would like my daughters to come and watch me play a tennis match, hopefully understand what’s happening before I finish, but I’m aware that that probably isn’t going to happen now. I’m a bit sad about that.”

Murray said the operation – the same one which has helped the American doubles player, Bob Bryan, recover from similar hip pain – did not come with a specific healing time, and he would not have it just to play tennis again.

“You have to allow bones to heal and muscles to recover properly to give the operation the best chance of improving your quality of life. Me trying to get on a tennis court after two months just because I’m trying to get ready for Wimbledon might not be the best thing for my health in the future. I have to do the rehab properly, respect healing times, not rush anything. I don’t know exactly how long it would be.”

Roger Federer, who will play Dan Evans next after a straight-sets win over Denis Istomin, led the accolades for Murray.

“He is somebody who will try everything to beat you – within the rules, with his fighting spirit, his tactics, slicing, defence, attacking play, even serve and volley, chip and charge,” Federer said. “He’ll leave everything out there. He’s one of the great retrievers we had in our sport.

“And carrying the weight of Britain on his shoulders, that was not easy for him. All of us, the players, we’re extremely happy that he ended up winning Wimbledon, Davis Cup, Olympic gold. He had to really fight for it and earn it, like world No 1. There’s a lot to admire about Andy, how he went about it.”

Federer said of Evans, who beat Japanese qualifier Tatsuma Ito in straight sets, “I like the way he plays. He’s got all the shots, likes to take chances, takes the ball early. It’s nice to see him back on the Tour as well. I’m happy for him that he won his first round.” – Guardian service