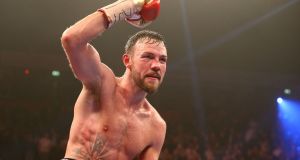 Limerick boxer Andy Lee will make his return to the ring on the biggest of stages at Madison Square Garden next month on the undercard of Gennady Golovkin and Daniel Jacobs’ title showdown.

The former world champion has not fought since his loss to Billy Joe Saunders in their WBO middleweight title fight in December 2015.

But on March 18th he will face KeAndrae Leatherwood (19-3-1, 12 KOs) in an eight-round middleweight contest.

Lee’s return means he will be the second Irish boxer in action in New York on St Patrick’s weekend, with Michael Conlan slated to make his professional debut in the MSG Theatre the previous night.

Katie Taylor had also been lined up for the Golovkin-Jacobs card but a dispute with Conlan’s promoter Top rank means she will instead appear on March 4th in London, the night of David Haye and Tony Bellew’s heavyweight grudge match.

Lee’s goal is to eventually get a world title opportunity against the Golovkin-Jacobs winner.

“My goal is to eventually challenge the winner of GGG and Jacobs. March 18 will be the first step on that journey,” Lee said. “I’m also very happy to be fighting in Madison Square Garden again, the scene of some of my greatest victories. I’m sure the Irish boxing fans will turn out and I look forward to putting on a world-class performance.”

K2 Promotions managing director Tom Loeffler says that Lee might get a shot at Golovkin further down the line after a proposed bout between the two had to be cancelled in 2014 after the Kazakh’s father died.