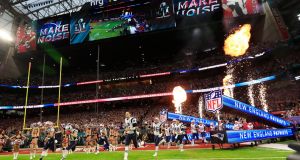 Tom Brady? Overtime? An incredible Super Bowl comeback? All the ingredients were there for a Super Bowl ratings bonanza. But viewership figures for the New England Patriots’ 34-28 overtime victory over the Atlanta Falcons on Sunday night were down slightly compared with last year’s game between the Denver Broncos and the Carolina Panthers.

Sunday’s game drew 111.3 million viewers on Fox, a high enough total to tie it for fourth place among the most-viewed programmes in TV history but down slightly from last year’s total of 111.9 million viewers. This was the eighth consecutive year that the Super Bowl exceeded 100 million viewers.

The game’s stunning ending – especially after what looked like a certain blowout, with the Falcons holding a commanding 25-point lead late into the third quarter – brought in a huge audience. The game peaked between 10pm and 10:30pm with a 52.1 rating and a 74 share, higher than at any point during last year’s game, according to Nielsen.

Fox said that when streams from its Fox Sports Go app and its Spanish-language sports channel, Fox Deportes, were added in, the viewership reached 113.7 million viewers, tying it for the second best multiplatform performance in Super Bowl history.

Still, for the second consecutive year, the Super Bowl failed to set a new ratings record, and the game capped a troubling year-long trend for the league. Ratings for NFL games in the 2016-17 regular season were down 9 per cent from the previous year and were off 6 per cent through the first three weeks of the playoffs, according to research firm MoffettNathanson.

NFL executives said the huge interest in November’s presidential election was responsible for siphoning away viewers, but the ratings, down 12 per cent during the election season, were still down 5 per cent after it.

Even the local Sunday afternoon games had viewership fall of 7 per cent this season, according to MoffettNathanson.

Sunday night’s heart-pounding conclusion apparently did not leave viewers wanting more of an adrenaline rush. Fox’s revival of its 24 series had 17.6 million viewers, the lowest viewership for a Super Bowl lead-out programme in 14 years.