Tom Brady is the quarterback who defies age and time 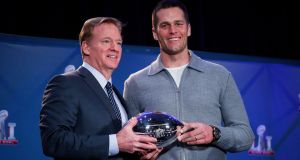 Before the Super Bowl winning drive Tom Brady stood on the Houston stadium’s field and said to his team-mates: “Let’s go.” And later, after the New England Patriots had won on the game’s final play and confetti tumbled over them their right tackle gushed: “He thrives on those moments.”

That was 13 years ago, on the night the Patriots won their second Super Bowl, which came in the same stadium, in a similar high-scoring game, won at the end by the Patriots on a drive led by Brady, who would be named MVP. Back then Brady was the 26-year-old quarterback who had won two titles in three years but wasn’t judged as the greatest at his position that the game had seen. That legacy would take more winning, more touchdowns and ultimately three more championships.

Now that he has won five Super Bowls, the most remarkable thing is how time has failed to take its toll on Brady. No quarterback at 39 makes storming through the final minutes of the Super Bowl look as easy as he did at 26. No quarterback has been as remarkably-consistent and dominant for two decades while players swirl in and out of the league around him.

A few days ago, Damon Huard – Brady’s backup on those first two championship teams – talked about returning to New England last fall for a celebration of that initial 2002 Super Bowl win and realizing that all but one of those Patriots had long retired. It was a jarring sensation for Huard, watching Brady that afternoon while assessing his own full post-football life.

“It’s just so hard in this job and profession to win,” Huard told the Guardian. “How they are still doing it is amazing. I was looking out there and I said to myself: ‘That’s No12 out there and it’s still [coach]Bill [Belichick]in the hoodie and they still have the drive and work ethic to make this happen.”

How is it possible for Brady and Belichick to keep winning? How do they go down 28-3 to the Atlanta Falcons, sending their benefactor Donald Trump to bed certain of their defeat, only to thunder back for a 34-28 overtime victory? How does Brady throw for a Super Bowl record 466 yards at an age when most quarterbacks have long left the game behind? Last year, Peyton Manning won this game at 39 and yet the win came in his final professional game, with his body crumbling and his mind more of a factor than his arm.

Brady looks as nimble now as he did all those years before. The popular belief is that his greatness comes because his offensive line keeps him from getting hit. Teams know they can’t rush more than four defenders at him or he will pick their defensive backs apart. Rarely are four pass rushers enough to beat Brady. But on Sunday the Falcons rushed four and it worked. They hit Brady. They hit him hard – he said so himself after the game. They made him force passes he didn’t want to throw. They rattled his timing. They made him uncomfortable.

When he started his final drive in regulation, 91 yards from the touchdown the Patriots needed, he had been sacked five times in the game and hit 16 times. Nobody hits Brady 16 times. And still he stood back up, found the spots where the Falcons defense had softened and fired passes to his players. Though New England stood 91 yards away from that touchdown there seemed no doubt they would score. Then, after they did, putting them down two points from tying, there was again little question he would complete the two-point conversion – this time a pass that rocketed into the arms of receiver Danny Amendola.

Following the final 75-yard drive in overtime, another group of players – men who were teenagers the last time he did this at a Super Bowl in Houston - would make the same kind of admiring statements as their predecessors 13 years before.

“When it comes down to game time, he’s the best,” Amendola said. “He’s our leader, he’s so competitive. We rally behind him.”

It was a quote that easily could have come from 2004.

There will be so many memories that are different this time from the others when Brady has won. This was the Super Bowl of redemption for the Patriots and their fans. They remain outraged by commissioner Roger Goodell’s draconian four-game suspension of Brady over the Deflategate scandal. After nearly two years of legal fights, Brady was forced to serve that suspension at the start of this season. But unlike the fans and team owner Robert Kraft, Brady has not worn the scars of that suspension.

Just as he did at the end of the other Super Bowls, Brady looked straight ahead.

But the 39-year-old Brady was not the carefree 26-year-old Brady. He fell to his knees after Sunday’s championship in a rare public expression of sensitivity. He talked around rumors that his mother has been seriously ill. He even struggled to remember what had happened in the game’s frantic last minutes, admitting: “There was a lot of shit that happened.”

Thirteen years after he took the Patriots to a championship on the same field, he became the only quarterback to win five Super Bowls. He also became the first to win four Super Bowl MVP awards. He gets older and nothing changes. He keeps winning. New England keeps winning.

It’s as if this all can go on forever.