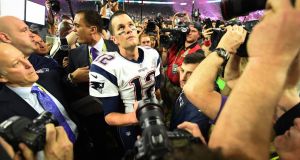 Tom Brady of the New England Patriots after the extra-time defeat of the Atlanta Falcons in Houston, Texas. Photograph: Timothy A Clary/AFP/Getty Images

Tom Brady jerseys have been top sellers among NFL players for most of the past year. Yet not even Brady has the most coveted one – the one he wore in the New England Patriots’ stunning comeback Super Bowl 51 victory over the Atlanta Falcons.

It went missing shortly after he took it off in the locker room after the game on Sunday night, and on Monday nobody seemed to know where it was.

“In Texas we place a very high value on hospitality and football,” Patrick said in a statement Monday. “Tom Brady’s jersey has great historical value, and is already being called ‘the most valuable NFL collectible ever’. It will likely go in the Hall of Fame one day. It is important that history does not record that it was stolen in Texas.”

It is not clear if it was misplaced or stolen; a spokesman for the team declined to comment. In a video shot in the locker room, Brady is heard complaining that somebody took the jersey. He had put it in a bag, he said, and noticed it was gone when he checked the bag later.

Replica jerseys can be purchased for about $120 from the NFL merchandise store, but a game-worn one, technically owned by the team and the league, could go for thousands of dollars in an auction.

On Monday morning, Brady said he was disappointed, but he appeared to have accepted that the jersey, the one that bore witness to the greatest comeback victory in a Super Bowl, was gone for good.

“Those are special ones to keep, you know, but what can you do?” he asked after receiving a football-shaped trophy for being named the game’s most valuable player. “I’ll take the ring, and that’s good enough for me.”

Social media weighed in on the jersey. Two fans caused a stir when they posted pictures on Instagram of them holding a Brady jersey in NRG Stadium after the Super Bowl, including the hashtag #stolehisjersey.

Not long after they amended their post to say #NOitsNOTThisSTOLENjersey.