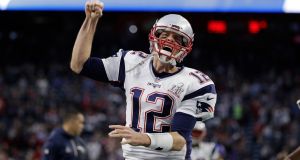 The New England Patriots are the Super Bowl champions once again. They beat the Atlanta Falcons 34-28 in overtime amid a frenzied climax in Houston on Sunday. At one point New England had trailed 28-3.

For the Patriots quarterback Tom Brady, it was a stunning ending to a season that ended in redemption and possibly cemented his position as the greatest player of all time.

Brady, arguably the most famous athlete in the US, had missed the first four games of the season due to a suspension for his part in the Deflategate scandal. On his return, he led the Patriots on a charge towards their fifth Super Bowl title in remarkable circumstances.

“We all brought each other back,” said Brady of his team-mates after the game. “We never felt out of it. It was a tough battle. They have a great team, I give them a lot of credit. We just made a few more plays than them.”

The game had been billed as the experience and wile of Brady and his head coach Bill Belichick against the explosive offence of the Falcons, led by Matt Ryan and the extravagantly talented wide receiver Julio Jones. It was the Falcons defence that was supposed to be their weakness but they handled the Patriots easily on their first two possessions.

On the first, Deion Jones landed a crunching tackle on running back LeGarrette Blount to force the punt; the second was even more emphatic with Tom Brady sacked twice in the space of three plays.

The Falcons had been dealt a blow in the run-up to the game when it was announced their centre, Alex Mack, who had been a crucial part of their running game throughout the season had fractured his leg.

Nevertheless, Mack played through the pain and he helped spring Devonta Freeman for a 37-yard gain on the Falcons’ first drive. But the high-scoring contest nearly every expert had predicted refused to emerge and the first quarter ended scoreless – the two best quarterbacks in the league this season had managed just 59 yards of passing between them.

It was the Falcons who finally scored a touchdown. Given the unspectacular play so far, it was fitting that it came from a short run by Freeman. But Ryan has developed a taste for the limelight after what had been, until this remarkable season, a career of mild underachievement.

In his first Super Bowl, it was Ryan’s seventh pass attempt before he failed to find a receiver: he made up for that on his eighth, a beautiful pass to the rookie Austin Hooper. The Falcons were running, the Patriots gasping.

A quick glance of the record books showed the task ahead of the Patriots: no team had ever won the Super Bowl after trailing by more than 10 points. The task went from challenging to positively vertiginous when Brady, under pressure from Atlanta’s pass rushers, was intercepted with 2:36 left in the first-half by Robert Alford, who had a long time to savour the highlight of his career as he trotted 82 yards into the end zone largely unopposed.

Even the Patriots cheerleaders appeared to be smiling through gritted teeth as they danced in the end zone during the break for the two-minute warning, a Stephen Gostkowski field goal to end the half was as good as it got for the four-time champions as they went into half-time 21-3 down.

While much of the attention was justifiably on Ryan’s accuracy, it was the swashbuckling Falcons who had been models of efficiency – they had scored on both of their trips into the red zone – while the Patriots, a team known for their brutal professionalism, had been sloppy, turning the ball over twice.

They had also failed to stop the Falcons’ run game: Atlanta had averaged 9.6 yards per carry in the first-half; New England managed just 2.5.

But the Patriots have been the best team in the NFL for more than a decade – a relentless winning machine – and no one should underestimate Brady’s sheer bloodyminded brilliance. A touchdown – the extra point was missed – and a field goal brought the score back to 28-12 with 9:44 remaining.

For the first time in the game, Ryan was under some pressure and the ball came loose when he was sacked on his own 25. The Patriots recovered, Brady found Danny Amendola in the end zone and a two-point conversion made it 28-20.

The impossible had gone to improbable and then on to possible all too quickly for the Falcons. A holding penalty stifled the Falcons’ next drive and put them out of field goal range, leaving the Patriots with plenty of time to score the tying touchdown. They would start a season-defining drive in their own nine-yard line with 3:38 to play.

The Falcons batted Brady’s passes a few times but the ball simply refused to fall to them, and the Patriots marched up the field thanks in large part to a brilliant catch from Julian Edelman, who twisted his body to haul in a deflected ball. When White tunnelled through for a short rushing touchdown a few plays later the Patriots needed a two-point conversion to level the game. Lesser teams may have lost their nerve but the Patriots made it look easy as Brady found Amendola with a short pass.

“Unbelievable,” said Edelman of his team’s comeback to tie the game. “It’s the microcosm of our life, our season. Mental toughness, believe, do your job, work hard and we’d be champions in the championship game.”

Now we would see what Ryan was made of. Time and again, his temperament in the biggest occasions has been questioned, separating him from the very best quarterbacks in the league. A field goal would win the Falcons the game but they could not get out of their own half. Somewhere Donald Trump, a friend of Brady and Belichick, must have allowed himself yet another smile.

And so we went to overtime, the first extra frame in the game’s 51-year history. The Patriots had the first possession, knowing a touchdown would win them the game. It looked like they had won it when Brady floated a pass towards Martellus Bennett in the end zone, but pass interference was called on the Falcons and the Patriots only needed to drive it home from two yards out. For once, Brady didn’t have the final say: White won it with a plunge near the pylon.

There was a huge, palpable whoosh in the stadium as 71,000 people inhaled and exhaled in astonishment. And then a surge of noise. The greatest Super Bowl of all time had ended.

“No doubt that was a tough one for us,” said the Falcons head coach, Dan Quinn. “That’s a hard one in the locker room . . . I love (my players), they battled. Tonight we came up short.”

If Belichick, the famous disciplinarian, attempted to tighten his team up in the locker room, it appeared to have done little good. Few could remember the last time a Patriots team was this listless but nothing should be taken away from the skill with which Ryan, looking every inch the league MVP, dismantled the New England defence.

He led his team 85 yards down the field in eight plays at the start of the third quarter to make it 28-3 and put the game out of reach. The touchdown came from a six-yard pass to Tevin Coleman and and that point Ryan had completed 12 of his 14 passes.