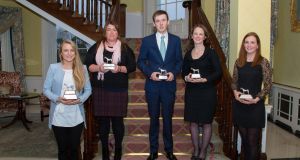 Germany-based Bertram Allen and Judy Reynolds were in The K Club on Monday for The Irish Field equestrian awards lunch where both were honoured for the third year in a row.

Allen, who on Sunday finished runner-up in the Grand Prix at Bordeaux, was crowned senior leading show jumper of 2016. The 21-year-old Wexford native landed five-star victories at the prestigious Hong Kong Masters, Paris Saut Hermes and at the Global Champions Tours in Hamburg, Cannes and Monaco. He was a member of the winning Irish team in the Furusiyya Nations’ Cup of St Gallen and secured over €500,000 when part of the Global Champions League winning team in Doha last November.

Allen finished that month out in style when repeating a phenomenal feat of winning three cars at the four-star show in Stockholm, Sweden, the highlight being his Grand Prix win aboard the brilliant mare Molly Malone V. He continues to grow his top string of horses and picked up yet another five-star victory at London Olympia with High Valley at the end of December. This coming weekend, Allen is competing at the five-star show in Hong Kong.

Co Kildare-born Reynolds is being credited with increasing the popularity of dressage in Ireland following her record-breaking season with Vancouver K.

On her way to claiming The Irish Field dressage rider of the year title, Reynolds recorded a top 10 finish in the FEI World Cup in Sweden last April and qualified for the individual final at last summer’s Olympic Games in Rio de Janeiro. She won four Grand Prix titles in a row in the USA during September including two in Central Park, New York.

Reynolds set an Irish dressage record in March when scoring 79.70 per cent at Al Shaqab in Doha and posted an excellent fourth place finish in the World Cup qualifier at London Olympia in late December which saw her become the first Irish rider to top the Western European Dressage World Cup League table.

Also from Co Kildare, Camilla Speirs was presented with the senior event rider of the year award following a season which saw her become the only Irish competitor to finish inside the top 10 at two of just six four-star events in the world, Badminton (ninth) and Pau (sixth).

In both instances, Speirs rode her Irish-bred gelding Portersize Just A Jiff with which she travelled out to Rio for the Olympics but, as reserve, didn’t get to start. At the lunch, she reported her 17-year-old Crosskeys Rebel gelding to be in excellent form with a fifth outing to Badminton being on his agenda.

Speirs was winning the senior award for the second time while, some years back she was a recipient of The Irish Field young event rider of the year award which, for 2016, was presented to Co Down’s Susie Berry who is based in England with Piggy French Eventing.

In spite of spending six weeks on the sidelines because of a broken ankle, Berry enjoyed an excellent campaign which started with a win in the CIC1* at Great Witchingham on Morswood. Other international highlights included a fourth-place finish in the CCI2* at Camphire on Vanir Hello Duca and, with the mare Carsonstown Athena, placing fifth in the CIC3* at Blair Castle and 10th in the CCI3* at Blenheim.

Kildare’s Mikey Pender is The Irish Field junior show jumper of the year for 2016. The 16-year-old won silver and bronze medals on Irish-bred horses in the five-year-old classes at the world breeding championships for young show jumping horses in Lanaken, Belgium, last autumn in spite of stiff competition in the final from seasoned international riders.

At home, Pender enjoyed a successful Dublin Horse Show, landing the five-year-old championship aboard Z Seven Canya Dance; he also won the Michael Meller young rider style award and the coveted RDS bursary prize. He then moved to Millstreet International Horse Show where he claimed the prestigious Boomerang Final and later returned to that Co Cork venue for the Junior European Championships where he finished 12th individually.

As he is currently competing, and winning, in the United Arab Emirates, Pender’s award was accepted on his behalf by his mother Annemarie.

The Irish Field awards were presented by the newspaper’s editor, Leo Powell, and Isabel Hurley, editor of the Irish Horse World section.

Presentations were also made at The K Club on Monday to the winners, or their representatives, of the Gain Horse Feed/The Irish Field Star of the Month awards for 2016. The winners, who were decided by online public voting, were mainly show jumping riders.

Having just returned to her seat, Reynolds was then announced as the Gain Horse Feeds/The Irish Field Star of the Year and was presented with this award by Henry Corbally, chief executive officer of feed company’s parent group Glanbia Plc, and Isabel Hurley.