Geraint Thomas withdraws from Giro with a fractured pelvis 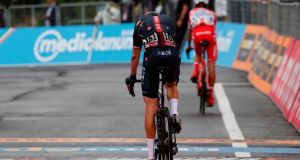 Geraint Thomas has withdrawn from the Giro d’Italia after scans revealed he suffered a fractured pelvis in a crash during Monday’s stage three to Mount Etna.

Thomas, the pre-race favourite, hit the deck hard when he rode over a water bottle which rolled across the road during the neutralised start of the stage in Enna.

The 34-year-old finished the stage more than 12 minutes down before being sent for X-rays. Although those initially showed no broken bones, fresh scans on Tuesday revealed a “small undisplaced fracture in the lower part of the pelvis,” according to a statement from the Ineos Grenadiers.

“It’s so frustrating,” Thomas said. “I’d put so much work in to this race. I did everything I could and feel like I was in just as good, if not better shape, than when I won the Tour. I was feeling really good. So for it just to end like this is gutting.

“I was really up for starting today. I woke up and wanted to start with the boys and at least help them go for stages over the next few days, but deep down I knew something wasn’t right, so we went to get these extra scans.

“It does make the decision easier when there’s a fracture in some ways, because obviously I don’t want to do any more damage.”

Earlier on Monday, Thomas used Twitter to lament his luck, saying: “2020 you can just do one now. Thanks for all your well wishes though guys.”

The news appears to indicate a premature end to Thomas’ 2020 season. He had targeted the Tour de France but was short of form at the Criterium du Dauphine in August, leading to a rejig and a switch to the Giro.

His second place overall at Tirreno-Adriatico, and fourth place in the time trial at the UCI Road World Championships had underlined his status as a favourite, and he emerged from Saturday’s opening time trial the best placed of the overall contenders.