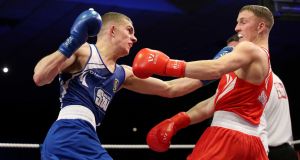 Conor Wallace in action during his amateur days against Michael O’Reilly in the National Elite Male Championships Finals at the National Stadium, Dublin. Photograph: Ryan Byrne/Inpho

After helping Conor McGregor prepare for the eagerly anticipated rematch with Nate Diaz back in 2016, life is now a far cry from the supercars and stalking camera crews that had become commonplace for Conor Wallace.

Having experienced the high life in the Crumlin fighter’s fight camp environment, the Down native has swapped the backseat of a Rolls Royce for the considerably less ostentatious Volkswagen Golf as he sets about carving out his own personal career in the fistic arts.

The young pugilist’s journey has been an eventful one, for many reasons, but it has led him to Brisbane where he is now preparing for a shot at the Queensland State title at the beginning of next month.

Stardom could very well lie over the light-heavyweight’s horizon, but should he get there his experiences in the Nevada Desert will stand him in good stead. Moreover, life within the maelstrom of a big Las Vegas fight week has whetted the appetite, making him long for his own rags-to-riches fairytale.

The easy option would have been attempting to hold on to his golden ticket into the UFC star’s entourage but for Wallace that was always a non-runner.

“I don’t want to live in somebody else’s limelight,” explains the 22-year-old who signed his first professional contract last August.

“I want to make my own. I want to get to the top myself.

“But the experience,” he says referring to his time in Las Vegas, “has left me hungrier than ever.

“I had it in me from a young age that I wanted to become a professional boxer and become a world champion myself. That was obviously a good stepping stone by showing me where I need to be.”

A talented amateur, with seven All-Ireland titles to his name, Wallace only became recognised outside boxing circles when a call came from Dublin 9 with a familiar inner city Dublin accent on the other end of the line.

And although he had previously travelled to Dublin to spar with McGregor, alongside Michael Conlan and Paddy Barnes, Wallace remained sceptical and, at first, suspected a menacing friend was responsible.

“The first time I got word was to go down for sparring,” he says. “But the second time it was himself [McGregor contacting me looking for me to go to Vegas. I rang Michael Conlan straight away but he assured me and said that he knew this was going to happen.”

Spending his days in combat with one of the most well-known sport stars on the planet, and seeing what is required to perform at the highest level, was just the springboard he needed to embark from where he left off back home. Yet his restarted career wasn’t without hiccups.

Still an amateur, Wallace was selected to compete at the 2018 Commonwealth Games in Gold Coast but was dropped before even stepping foot on the plane due to accusations and a confrontation by a vigilante group from which no charges were ever brought against the Down man.

Alas the opportunity had already passed. The Ulster man wasn’t unfamiliar with such disappointments, however, having lost out to Michael O’Reilly for a spot on the Irish Olympic team in Rio.

O’Reilly never fought in Brazil, as it happened, due to a failed drugs test but it was little consolation for Wallace watching on from an armchair back home.

When he was ultimately excluded from the squad heading to the Commonwealth Games, he refused to sit back and headed for the Antipodes anyway in search of an avenue into the professional game.

“Long before the Commonwealth Games I was in touch with Steve [Deller, his coach] and Fortitude Boxing,” he says. “Patrick Hyland from Dublin was onto Steve and talking about me and Steve contacted me.

“So I came out to see what the gym was like in April when the Commonwealth Games were on. I saw what the set-up was like and I knew that this is where I wanted to be.

“I was always there or thereabouts but I wasn’t going to stick around any longer for the chance to go to Tokyo. I would have been 24 or 25 at that stage; that’s nearly too old to be turning professional.”

Deller’s name is synonymous with boxing in Australia. Fortitude Boxing, his gym, has established plenty of Irish connections through the years helping, in particular, the current world-title-chasing Dennis Hogan through the early stages of his career.

Under Deller’s tutelage, Wallace expects to be fighting for a national title in Australia over the coming months and once he challenges for the state title.

“Steve has been in contact with the Australian champion’s team to try and get a fight with them within the next four months. That’s one of the things that I wanted to do when I came out here; to keep active,” he says.

“You can get the fights out here fairly fast and improve your record. But I still dream of coming home to fight for the Irish title. You can always come back and do that. They’re all stepping stones towards that world title.

“We’ve a week and a half now of training hard for the Queensland title and then we’ll taper off for the last while. You’re trying to get as many fights as you can when you’re starting out.

“I’ve got a great team around me – Greg Eadie, Simon Orton, Neville Matthews and Steve – and they’re really pushing me. They’ve been getting me ready and I’ve been doing the rounds in sparring so I can’t see how there would be any issue.”

In fact, the rising star believes more rounds could be to his advantage.

“I like to work my opponents out,” he explains, “and in the amateurs you have to get in and get it done in three rounds.

“In the professional world you can sit back a little bit more and have a look and pick your shots. So as the rounds are building up I feel like I’m getting better and better each time. I feel as the rounds go on I’m coming on stronger.”

As professional boxing has hit a lull on these shores in recent times – due to a blanket ban on Irish media by MTK Global among other reasons – Wallace could very well become the latest youngster to show that a path can be found elsewhere, following in the footsteps of world champion TJ Doheny and Hogan, Deller’s former pupil.