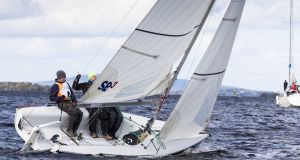 Autumnal winds herald the season for All-Ireland Sailing Championships commencing this weekend in Schull with the junior title before moving to the east coast for the seniors on the first weekend of October. Both events are set to have strong family representation featuring sibling as well as wife and husband pairings.

This weekend’s opener is also set to be dominated by the weather with strong winds forecast but organisers are hopeful of squeezing in the minimum three races required on either Saturday or Sunday as an alternative to the full programme on both days.

Clare Gorman of the National Yacht Club, representing the Laser Radial class, is likely to be among the frontrunners this weekend and has paired with her brother Conor for the event, to be sailed in the locally built TR dinghy.

Girl nominations to the event are likely to be as strong as their counterparts, confirming recent trends towards gender parity at least as far as youth level goes.

Other contenders include Monkstown Bay Sailing Club’s Chris Bateman, a regular sailor at Schull and nominated by the RS200 class and racing with his brother Olin, while west Cork’s Micheál Ó Súilleabháin from Kinsale YC, another Radial nominee, with Justin Lucas crewing, is a probable finalist.

Meanwhile, the following weekend’s format is sure to lean in favour of David Gorman, father of Clare and the reigning Flying 15 national champion with his crew Chris Doorly. The event is hosted by his own National YC so has home waters advantage while the event features the Flying 15 class as the ‘weapon of choice’ for this year’s event.

Nevertheless, Gorman and Doorly have plenty of talented sailors to challenge them, led by Strangford Lough’s Peter Kennedy of the SB20 class with Stephen Kane, the 2018 winners at Lough Ree YC where that event was sailed in SB20s.

Other contenders may include Robert Espey of the RS400 class from Ballyholme YC, sailing with Andrew Baker, while Seán Craig of the Royal St George YC, nominated by the Laser Radial class, has recruited Flying 15 maestro Alan Greene as his crew for the event.

Not that hosting the event in a particular class automatically favours the incumbent nominee but deposing that class champion for the All-Ireland “champion of champions” title for a place on the historic silver salver must surely be an added bonus.

More traditional classes will be well represented at the senior event, ranging from Mermaids to Shannon One-designs. The world’s oldest dinghy class, the Water Wags has nominated 1988 Olympian Cathy MacAleavey who will have husband Con Murphy as her crew.

Their Olympic silver medallist daughter Annalise Murphy this week confirmed that she will return to the Laser Radial class after attempting a 49erFX skiff campaign with Katie Tingle that was formally abandoned last week. Murphy will face Howth’s Aoife Hopkins and Lough Derg’s Aisling Keller, who both achieved the Olympic qualification standard for Ireland during the summer in a three regatta selection trials series early in 2020.