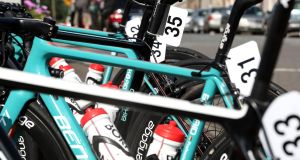 Hitting the top spot after netting a bronze medal last year, Alice Sharpe (World Cycling Centre) won the women’s road race at the Irish national championships on Saturday evening. Sharpe had shown strong form last week when she took 25th in the road race at the European Games in Minsk, Belarus, and proved too quick for her breakaway companion at the end of the 101.45 kilometre event in Derry.

Defending champion Eve McCrystal had a stressful start to the race when she punctured very early on. She managed to return to the bunch, but spent energy she had planned to use in a more aggressive way later on. She missed out when the day’s medallists pushed away on the Chapel Road climb on lap two of five, and spent time chasing hard as part of a group of seven riders. She was later distanced and lost her chance of a repeat championship win.

The three leaders pulled further and further clear of a stop/start chase group, which got bogged down in attacks rather than consistent co-operation. Thursday’s time-trial championship winner Kelly Murphy (Storey Racing) decided to try her solo skills and managed to bridge across to the leaders heading onto the second-last lap.

However, the huge effort she made saw her distanced on the climbs several kilometres later and she lost contact. Smyth also slipped backwards, leaving Sharpe and Cotter to sprint it out for the champion’s jersey and the gold medal.

Smyth held off those behind to take the bronze and also won the Masters’ title.

Moriarty is a first year junior but despite the disadvantage of racing against competitors with an extra year’s experience, he has had a strong season with several victories. He was aggressive from the start of the 101.45 kilometre event, going clear on the opening lap as part of a seven-man group.

The bunch chased hard and after a regrouping heading onto lap two, Finley Newmark (VC Londres) struck out ahead on the first climb. He was caught by eight others at the end of that lap, with six of those then pressing ahead on the penultimate lap of five.

The attackers were Moriarty, Newmark, McCambridge, Ryan, Keown and Aaron Wade (Vitus-Chill-NRPT). The latter was distanced on the final lap when first Moriarty and then Ryan put in big attacks. He clawed his way back on but was shed with seven kilometres remaining when Ryan put in a big move.

The Zappi Racing Team rider opened a gap of seven seconds but was hauled back before the finish. Others tried their luck but it came down to a five-man sprint, where Moriarty finished comfortably ahead of Ryan, McCambridge, Keown and Newmark.

Meanwhile, Irish riders performed well at the European Games on Saturday evening. Shannon McCurley finished eighth overall in the four-race women’s Omnium. “I’m used to really sprinting it out, and it was a very tactical race,” she said after the points race, the concluding event in the Omnium. “My plan was to go in and be aggressive. It was something I couldn’t do last year, so I leaned up and got a lot fitter since the world championships. I came in wanting a medal, but things didn’t go my way. I’m still getting there.”

The men’s duo of Mark Downey and Fintan Ryan also finished eighth in their event, the Madison, having been as high as third overall with 45 laps out of 200 laps to go before drifting back.

“It was a hard race, really long, 200 laps, 50 kilometres,” said Ryan afterwards. “I really felt it. But we were sitting in the top four or five for most of the race. That was my first time with Mark for over two years, and first time doing a race that length for three years, so I’m really happy with it.”