AFL to press ahead with 2020 season despite Australian government measures 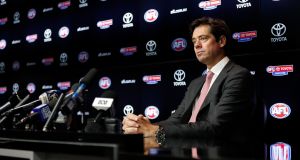 The Australian Football League (AFL) will press ahead with the opening weekend of the top flight Australian rules season despite new measures to control the coronavirus introduced by the government.

Prime Minister Scott Morrison on Wednesday declared a “human biosecurity emergency” which he said could last at least six months, telling the country’s citizens to abandon travel abroad and avoid gatherings of more than 100 people.

AFL boss Gillon McLachlan told a news conference the 18-team competition’s regular season would kick off as scheduled on Thursday when Richmond take on Carlton behind closed doors at the Melbourne Cricket Ground (MCG).

“We start tomorrow night with confidence ... that our players are well placed to bear the proportionate risk of playing a contact sport,” McLachlan said.

“We commence tomorrow night on government advice that putting on a game sits within the newly-established protocols and guidelines announced by the Prime Minister this morning.

“We don’t know how many games we will get into this 153-game journey before we have to pause but ... tonight our industry is unified in making a decision to start.”

The season had already been shortened to 17 rounds of matches from the usual 22 and McLachlan announced the length of each quarter would be reduced from 20 to 16 minutes in duration.

The AFL had already banned fans indefinitely from matches following government advice last week to shut down events involving crowds of 500 or more.

The league is one of the world’s best-attended with average crowds of about 35,000 last year.

The National Rugby League, the most popular professional winter sport in the country’s eastern states, started its season this week and will continue without spectators this weekend.

The top flight A-League soccer competition, which is approaching the end of its season, will also continue this weekend without fans in attendance.

McLachlan said the AFLW women’s competition would forego the last two weeks of the home and away season and go straight to the championship playoffs.