Northern Ireland to close schools, as Minister warns ‘many more’ will become unemployed 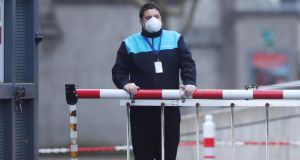 A security guard wearing a face mask at Croke Park in Dublin, where the stadium is being used as a testing facility for Covid-19. Photograph: Niall Carson/PA Wire

A further 74 cases of Covid-19 were confirmed by the National Public Health Emergency Team (NPHET) on Wednesday night.

The new cases involve 29 women and 45 men. The total number of cases in the Republic is now 366.

Two-thirds of cases were among people aged under 55, with almost one in four aged 35-55. One case in five involved a healthcare worker, and one-third of such cases were associated with travel.

Responding to the latest figures, Dr Tony Holohan, chief medical officer in the Department of Health, said: “Again, today we are seeing another increase in case numbers. The importance of social distancing cannot be underestimated. Everyone must play their role.”

Dr Holohan said just three counties have recorded no cases so far. These are Leitrim, Laois and Monaghan.

Meanwhile, all schools in Northern Ireland are to close from Monday in response to the coronavirus crisis.

The DUP First Minister Arlene Foster made the announcement on Wednesday evening. She said it was an “unprecedented” step and one that was likely to mean schools will remain shut during the summer.

A number of Northern Ireland schools taking advantage of the St Patrick’s Day holiday already had decided to close for the rest of this week.

The move comes as Britain ordered the closure of schools from Friday until further notice, with British PM Boris Johnson saying that “exams will not take place as planned in May and June”.

On Wednesday night, the Department of Foreign Affairs announced it was advising against travel to or through Germany amid the outbreak.

It had announced earlier on Wednesday it is extending its deadline for all Irish tourists in Spain to return home until this Saturday, March 21st.

Also on Wednesday, Minister for Finance Paschal Donohoe has said that many more Irish people will find themselves out of work as a result of the Covid-19 crisis.

However, Mr Donohoe refused to put a figure on the overall number he might predict in this regard, or confirm figures of 350,000 to 400,000 people out of work estimated by economic commentators.

“At this point it is not appropriate for me to indicate what figures of unemployment we will get to,” he told RTÉ Radio 1’s Drivetime. “At the moment we are not clear about what will happen the live register over the coming weeks.”

He said that it was clear Ireland was now facing a very serious economic shock and that “many more people will find themselves unemployed as a result of us dealing with the consequences of Covid-19”.

He said the State would quickly rebuild the economy and get people back to work once the crisis had subsided.

“The intensity with which the Government is working will be matched with what we can do to help people get their jobs back,” he said.

Mr Donohoe also defended the Government decision to commit 1 per cent of the general budget to the crisis at this moment in time.

Asked why the UK had committed 15 per cent for such measures, he said the UK’s figures represented money that could be raised through future borrowing. He said the actual budgetary component of the UK commitment was roughly similar to the Government’s commitment.

Mr Donohoe said the State’s had good standing in terms of seeking loans.

“We are in a [good] position in that our ability to access additional money is very high,” he said.

Mr Donohoe was speaking following a meeting with the heads of the State’s five banks on Wednesday, in which the banks agreed to measures including mortgage breaks and the deferral of repossessions and legal cases against defaulting borrowers in response to the current crisis.

About 24,000 people have contacted the HSE in the last 24 hours regarding taking up posts in the health service to deal with the expected surge in demand for care arising from the coronavirus outbreak, Minister for Health Simon Harris has said.

The Government on Tuesday said it would recruit everyone available with qualifications for roles in the health service during the current crisis.

The health service is continuing to struggle following a large surge in people referred for testing for the coronavirus.

Since Monday, GPs have been able to refer patients with symptoms, such as a cough and fever, for testing – which has created a backlog the health service is now struggling to clear.

During a visit to the facility on Wednesday morning, Taoiseach Leo Varadkar was told that the National Virus Reference Laboratory in UCD will soon be able to conduct 15,000 tests for the coronavirus every day.

In a televised address to the nation on St Patrick’s Day, Mr Varadkar said officials predicted the number of cases here could rise to 15,000 by the end of the month.

Mr Varadkar said that in the coming weeks the elderly and more vulnerable would be told to stay indoors in a practice called “cocooning”, where they would be supplied with essentials.

The unprecedented measures will attempt to slow the spread of the virus and would likely last for months, he said.

Social distancing requirements have led to the closure of the country’s 7,000 pubs and many restaurants, leaving tens of thousands facing unemployment.

Ryanair Group Airlines announced it will cut flight schedules by more than 80 per cent from midnight on Wednesday until midnight on Tuesday, March 24th. “All affected customers will receive an email to advise them of their options and we kindly ask customers not to call us as our call centres are overloaded dealing with customer queries,” the airline said.

It said: “We would ask people to bear with us while we work through the ramifications of this unprecedented decision and patiently await any further news in the coming days and weeks.”

Both Brown Thomas and Arnotts closed at 5pm on Wednesday evening as the impact of coronavirus continues to send shockwaves through the retail sector.

Penneys also said it was closing until further notice.

Supermarkets across the State have started rolling out measures aimed at protecting customers and staff. Amongst the most visible steps being taken are moves to ensure social distance is maintained and a reduced reliance on high contact surfaces.

Elsewhere, the board of Horse Racing Ireland (HRI) has approved a decision for Irish racing to continue to take place behind closed doors, although with greater restrictions.

Officials at HRI stressed how the decision to keep racing when so much of the rest of society has closed down was made after consultation with the Government.

Both Britain and France have suspended horse racing, while race meetings have taken place behind closed doors in Ireland since Friday.

In a statement on Wednesday, Cork GAA said that Páirc Uí Chaoimh had been made available to the HSE for use during the coronavirus crisis.

On Thursday, the Dáil is set to consider emergency legislation to give the Government sweeping powers to respond to the coronavirus outbreak.

The measures would include powers to direct people to stay in their homes and detain those believed to have the virus who refuse to self-isolate. It would also allow for events or gatherings that pose a clear risk to public health to be prohibited.

The legislation will also provide for enhanced income supports for people who are diagnosed with Covid-19 or required to self-isolate. Additional reporting: PA