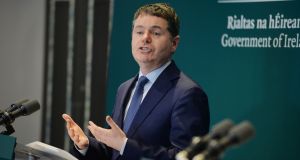 The Minister for Finance Paschal Donohoe will hold a meeting on Wednesday afternoon with bank chief executives on how the industry is responding to the fallout from the Covid-19 crisis and an expected surge in bad loans as many businesses go under and homeowners fall behind on mortgage payments, according to sources.

The meeting has been provisionally scheduled for 4pm in the Department of Finance, with participants, also including Banking & Payments Federation Ireland CEO Brian Hayes, practising social distancing guidelines.

Banking sources say there has been a surge in calls from homeowners and small companies in recent days seeking payment holiday periods, amid estimates that 340,000 bar, restaurant and retail workers will have lost their jobs within days by the end of this week as a result of measures put in place to tackle the spread of coronavirus.

The Minister will be updated on measures taken by lenders in the past week to offer loan payment breaks for households and businesses affected by the crisis – with accrued interest added to the loan principals – as well as emergency working capital and trade finance lines, according to banking sources.

“We saw a number of exploratory calls last week from people looking at what options they might have. That’s changed. There’s been a significant increase in borrowers looking for forbearance,” said a source at one of the State’s five mainstream banks.

Banks will also questioned on how they will be able to make it easy for struggling businesses to secure overdrafts and short-term loans to make initial payments to workers that have lost their jobs under an emergency scheme, where money paid out will ultimately be refundable by the Government.

Irish banks having lowered their levels of non-performing loans (NPLs) amid pressure from regulators from a peak of €80 billion, or 32 per cent of loans, in 2013 to about 5 per cent through the restructuring of problem loans in a recovering economy and loan sales.

The concern now is that temporary forebearance measures as a result of Covid-19 will lead to another spike in loans that will need to be classified as NPLs unless the European Central Bank (ECB) makes allowances.

There has been no clear guidance to date, other than the ECB saying last Thursday supervisors have “sufficient flexibility to adjust to bank-specific circumstances”. The European Banking Authority said that it was “crucial” that banks correctly classify “any deterioration of asset quality” accurately and in a timely manner.

Borrowers whose loans may ultimately have to be classified as NPLs face the prospect of their credit ratings being affected and higher “risk premium” rates being applied to future loans.

There is a view in banking circles that an enhanced version of the small business credit guarantee scheme, initially launched by the Government in 2012 and subsequently updated twice, may make it easier to keep credit flowing through the economy.

Meanwhile, the Central Bank of Ireland has so far resisted calls from analysts and economists to allow lenders to tap capital reserves set aside for a rainy day in order for them to continue to lend during the coronavirus crisis.

Goodbody Stockbrokers analyst Eamonn Hughes estimates that a removal of the 1 per cent buffer that Irish banks have had to hold since last July could support about €10 billion of additional lending in the economy.

Irish banking stocks were down sharply again on Tuesday as investors continued to fret about the economic impact of Covid-19 and an expected surge in bad debt. AIB was down 6.5 per cent at 1.30pm, while Bank of Ireland lost 10.3 per cent.

“This is a national emergency and our response to it will be as strong as possible – for our customers, colleagues, the economy, and society as a whole,” said Bank of Ireland chief executive Francesca McDonagh said in a statement on Tuesday. “We have a range of options in place for customers, and we will do more to find solutions during this very challenging time.”

Mr Donohoe said in an interview with RTÉ Radio’s Morning Ireland on Tuesday that the Government, while seeking to tackle the public health crisis caused by Covid-19, is also planning for ways to reboot the economy afterwards. He said that the aim is to “make the recovery as sharp, quick and inclusive as possible”.