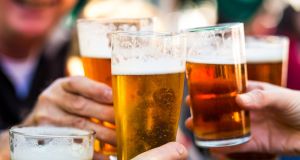 Mitchells & Butlers, in which Irish horse-racing magnates JP McManus and John Magnier hold a combined 23.5 per cent stake, said that it was ‘encouraged’ by stimulus measures announced on Tuesday by chancellor of the exchequer Rishi Sunak. Photograph: iStock

Irish-backed UK pub giant Mitchells & Butlers warned on Wednesday that it “could suffer a significant loss” in the four weeks before it is due to have its debt service covenants tested, as the spread of Covid-19 is set to lead to a slump in sales.

Still, the Birmingham-based company, in which Irish horse-racing magnates JP McManus and John Magnier hold a combined 23.5 per cent stake, said it should clear the test.

A containment strategy adopted by Boris Johnson’s government, including the recommendation to avoid pubs and restaurants, “is now expected to lead to a significant downturn in sales”, the company said in a trading update. Mitchells & Butlers’ business comprises 1,748 pubs, bars and restaurants under a number of brand names: All Bar One, O’Neill’s and Ember Inns.

“Given the rapidly evolving nature of the situation, it is impossible to quantify the impact Covid-19 could have on our financial performance,” it said.

“However, we expect a significant reduction in our expected outturn for 2020 and, given this uncertainty, can no longer provide detailed guidance on the expected forward financial performance for the year.”

Mitchells & Butlers said that it has a “strong balance sheet with material cash resources” to fund its obligations until the April 11th end of its fiscal first half of the year, when it faces a covenant and restricted payments test, “and well into the second half”.

“Sufficient headroom has been established such that we believe the group could suffer a significant loss in the remaining four weeks to the test date and still clear covenant levels,” it said.

Mitchells & Butlers said that it was “encouraged” by stimulus measures announced on Tuesday by the UK chancellor of the exchequer, Rishi Sunak, “notably business rates relief and access to a credit guarantee facility, which should further underpin our future performance and liquidity”.

In the meantime, the company said that it is working to protect its trading and cash flows, taking actions including a suspension of a capital investment programme and a reduction of costs across the business.