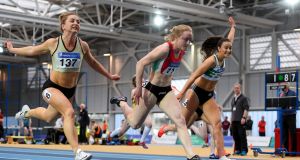 Amy Foster, second from left, of City of Lisburn AC on her way to winning the Senior Women 60m in Abbotstown. Photograph: Eóin Noonan/Sportsfile

Amy Foster is now the undisputed fastest women in Ireland. At least indoors she is, over 60 metres, where it’s all about pure speed and every split second counts.

Foster has been sharing that honour, not just indoors but outdoors too, only now she’s split out on her own - running 7.27 seconds to win the National Indoor title, improving on the national indoor record in the process.

Coming to the Sport Ireland National Indoor Arena at Abbotstown, Foster had run 7.30 last month, that equalling the existing national indoor record already shared by Anna Boyle and Ciara Neville. The clear intention was to go faster here and Foster did exactly that.

Unfortunately she couldn’t quite drag Joan Healy to the qualifying time for the World Indoors, set for Birmingham on the first weekend in March: Healy clocked 7.31 in second, 7.30 being the required standard, which would have made for a nice family double given her sister Phil has already qualified in the 400m. Neville took third in 7.35.

No such regret for Foster - who now goes to Birmingham in the form of her life, and with some consolation too for missing out on selection with the 88-strong Northern Ireland team for the Commonwealth Games on Australia’s Gold Coast in April.

“It’s a nice way to finish before the World Indoors, and certainly leaves me all ready to go in two weeks’ time,” said the 29-year-old, who runs with the City of Lisburn AC. Foster still shares the outdoor national 100m record with Ailis McSweeney, at 11.40 seconds, although it may only be a matter of time before she splits away on that front too.

“The 7.27 gets me well under the 7.30, though I still think I can go faster, but definitely very happy with that, sure.”

Having run 52.08 last month, second only to the national record of 51.58 held by Karen Shinkins since 2002, Phil Healy may well represent the best Irish chance or progressing through the rounds in Birmingham: here, the Bandon woman simply cruised to the national title, her 53.10 seconds leaving her with plenty of room to spare of second-placed Catherine McManus from Dublin City Harriers, who ran 53.81.

Ciara Mageean is the only other Irish qualifier for the World Indoors, over 1,500m, although she decided against competing here, having raced back-to-back over the previous weekend in Boston and New York.

Mark English could probably have put himself in line for selection too, but is only flirting with this indoor season - winning another 800m title here in 1:53.53, showing his class with 52-second last 400m. That was enough to hold off fellow Donegal athlete Karl Griffin, second in 1:55.14, while European junior bronze medallist John Fitzsimons was third in 1:55.20.

“The European outdoor championships in Berlin in August are the priority for me,” said English, a medical student at UCD. “Winning the bronze medal four years ago is a good memory for me, and I’d like to do something similar again this time.”

English-born sprinter Leon Reid, who had been in the process of transferring allegiance to Ireland before the IAAF put a freeze on all such processes, won a 60m-200m sprint down, taking the longer distance in 21.36 seconds.

Competing for Wexford club Menapians AC, Reid, whose mother was born in Belfast, also won the 60m in 6.72: Thomas Barr, the 400m hurdles not an indoor event, dropped down to the 400m flat and took fourth in 21.70.

The highlight of Saturday’s events was unquestionably Sarah Healy from Blackrock AC, the 17-year-old running an Irish under-20 and youth 3,000m record to win her first senior title in 9:10.43.

With that Healy left Rio 2016 Olympian Kerry O’Flaherty (Newcastle) firmly in her wake: O’Flaherty led the first km in roughly 3:10 and then Healy took over winding it up sublimely to 3:05 and finishing off with a swift 2:55 final km. Meghan Ryan (DSD) got up for bronze in 9:43.35.