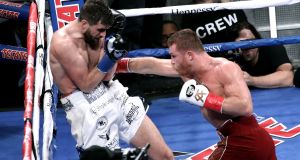 Saúl “Canelo” Álvarez did exactly what he was supposed to do against an overmatched opponent: he wasted no time and he closed the show.

The 28-year-old superstar from Guadalajara dropped Liverpool’s Michael ‘Rocky’ Fielding four times in a little over eight minutes on Saturday night at Madison Square Garden to win the WBA super middleweight championship and join an elite group of Mexican fighters to capture world titles in three different weight classes before a sold-out crowd of 20,112.

For Álvarez, the unified middleweight champion fresh off a signature win in an epic sequel with Gennady Golovkin less than three months ago, it was a note-perfect kick-off to the blockbuster 11-fight, $365 million (€323 million) contract he signed with DAZN, the upstart subscription streaming service which broadcast Saturday’s card.

And surely that was in part by intelligent design: while Fielding did bring the WBA’s secondary title belt to Saturday’s table that allowed the promoters to dress up the affair as a meaningful bid for history, the 31-year-old was clearly a limited domestic-level champion handpicked as a soft touch to make the sport’s biggest star look good.

Álvarez (51-1-2, 35 KOs) threw crisp, patient combinations with menace from the opening bell as the rangy Fielding, who enjoyed half-foot advantages in height and reach, attempted to leverage his physical assets by doubling and tripling up the jab in the centre of the ring. But the redheaded puncher was operating with a flagrant disrespect for Fielding’s power and charged right into the pocket, unloading with textbook shots to the body and sending the amiable Scouser crumpled to a knee with about a minute left in the round on a left hook. Fielding beat the count and made it to the bell, but the unmistakable look of concern on his face spoke volumes and augured the short night to come.

For Fielding (27-2, 15 KOs), the constellation of factors conducive to an upset was always going to include an off night for Álvarez, but it was obvious that wasn’t in the offing from early in the second when the on-form Mexican began pouring on the punishment and rearranging his opponent’s insides with exquisite body work. A thudding left-right combo upstairs by Álvarez caught a lot of leather but still appeared to stop the bigger man in his tracks. Then another left to Fielding’s marked-up torso sent the champion back to the canvas with about 20 seconds left in the frame. He beat the count and the bell once more, but the end quite clearly was near.

“That was the plan, to attack to the body,” said Álvarez, who landed 73 of 141 punches (52 per cent) according to CompuBox’s punch statistics, including nearly half of them to the body, compared to 37 of 183 for Fielding (20 per cent). “He committed the error by continuing to exchange with me.”

The worst of it, predictably, came in the abbreviated third as Álvarez picked Fielding off with one body shot after another thrown with poise and an accuracy that grew more and more dumbfounding as the suffering accumulated.

Fielding went for broke in returning fire and in fact landed his best combinations of the fight in those dying moments, but the relentless Álvarez marched through them like raindrops as the crowd leaned forward in anticipation of a killshot.

The brave Fielding made it to his feet after the third knockdown from yet another left to the liver, but he was quickly sent down a fourth time with a right hook upstairs as he ducked down, prompting referee Ricky Gonzalez to do the right thing at the 2:38 mark.

“The better man won,” Fielding said, matter-of-factly. “It was a great week, I met some great people. I lived a dream.”

Oscar De La Hoya, Álvarez’s longtime promoter, said the entire team will enjoy the holiday before assessing potential opponents for his fighter’s scheduled Cinco de Mayo fight in Las Vegas, adding that it could take place at either middleweight or his freshly established super middle foothold. Álvarez himself, who had two stints as a junior middleweight title-holder before climbing to 160lbs, refused to rule out a third meeting with the heavy-handed Golovkin, who is unlinked to any network since HBO’s departure from the boxing business and weighing offers from a number of companies including DAZN.

“For me, I feel like on September 15, I showed that I was best,” Álvarez said of Golovkin. “But it was two great fights and if the people want it, we can make it.” – Guardian