Honours even in Merseyside derby, could the USA be rugby’s next superpower? 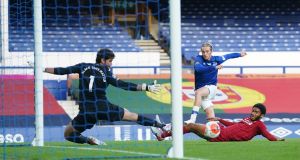 It was honours even on Merseyside yesterday, as Everton and Liverpool played out a drab 0-0 draw behind closed doors at Goodison Park. A point moves the visitors closer to their first league title since 1990, while Carlo Ancelotti’s side will regret a number of late misses as they remain without a derby victory since October 2010. Meanwhile Chelsea have opened up a five-point gap over Manchester United after they came from behind to beat Aston Villa 2-1 at Villa Park. The hosts took the lead on the stroke of half-time thanks to Kortney Hause but quick fire goals shortly after the hour mark from Christian Pulisic and Olivier Giroud earned Frank Lampard’s side all three points and edged Villa closer to the drop. Meanwhile Newcastle United pulled further clear of danger after they beat Sheffield United 3-0 at St James’ Park, as Steve Bruce’s side capitalised on the sending off of Ireland international John Egan after 50 minutes. In tonight’s sole Premier League fixture, Burnley travel to the Etihad to take on Manchester City (kick-off 8pm).

Elsewhere, in this morning’s Tipping Point column, Brian O’Connor has suggested the USA could win the Rugby World Cup before Ireland do - providing Major League Rugby can help grow the sport in the States. He writes: “They can bring immense enthusiasm and athletic ability but haven’t the grounding in basic skills of the game that is taken for granted elsewhere. The prospect of having a professional league to aim at is a crucial foundation stone in changing that. Without it there’s little hope of implementing the sort of culture change that can have significant numbers of kids playing the game. Manage that and the potential for the US to become a first world rugby power is manifest.”