Players, caddies and staff left the course, which had no spectators due to Covid-19 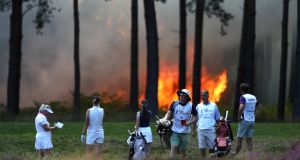 Sophie Powell, Cara Gainer and Gabriella Cowley, along with their caddies, look on as a fire nears the 10th hole during day three of The Rose Ladies Series. Photograph: Getty Images 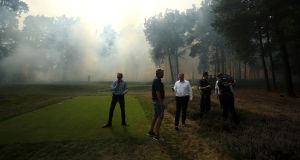 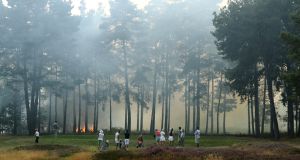 This week is the first ever ladies professional event at Wentworth Golf Club. Photograph: Getty Images

A wildfire at the side of Wentworth Golf Club forced the suspension of play in the Rose Ladies Series Grand Final. The blaze caused smoke to sweep across the Surrey course, leading to the area being evacuated by emergency services.

The fire had spread from Chobham Common, near to the golf course, and due to the dense population of trees, precaution was shown by organisers to ensure the safety of participants, as emergency services attempted to stop it spreading from just off the 10th hole of the West Course.

Players, caddies and staff left the course, which had no spectators because of rules relating to coronavirus.

Temperatures hit 36C in the south east of England on Friday, with Heathrow and Kew Gardens recording 36.4C (97.5F) on Friday, the highest on any day in August since 2003.

Alice Hewson was leading the competition by a shot from Charley Hull in the third round of the competition, with Elizabeth Young and Georgia Hall tied for third. The tournament is organised by Justin and Kate Rose, with the two previous rounds played on Wednesday and Thursday at North Hants and the Berkshire.